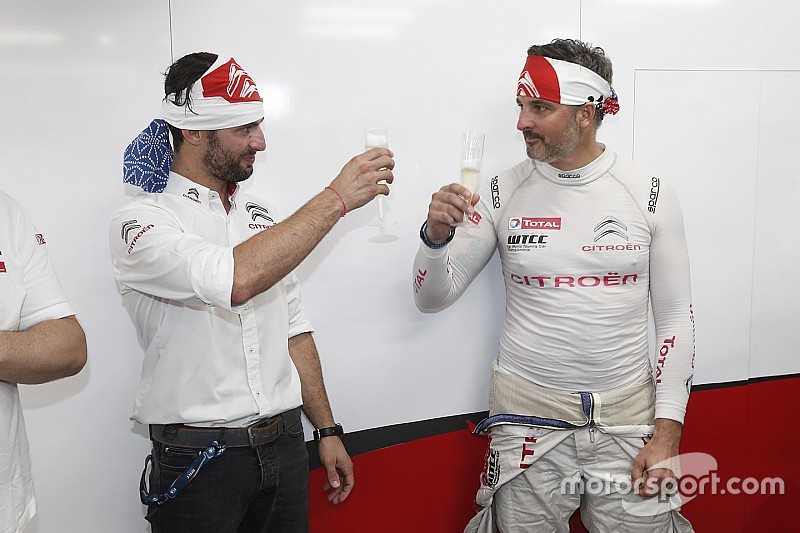 Yvan Muller has thanked Citroen teammate Jose Maria Lopez for his "gesture" of handing him the lead of the second race at Motegi, as the Frenchman claimed his first WTCC of the season.

Lopez only needed to finish ahead of Honda’s Tiago Monteiro in the main race to provisionally secure his third WTCC drivers’ title - and while leading the main race, the Argentine decided to slow down, allowing Muller to go through and take the win.

“It was not an easy decision,” said Lopez. “It’s not easy for me to give up a win. I also know they’re fighting for the championship, and I don’t really want to get involved, but it was more a gesture to Yvan.

“I hope he doesn’t take it the wrong way, which is why it was a bit difficult to take the decision, as I was thinking maybe it would be seem disrespectful to him.

“I wanted to show my respect for him as he’s a great champion, and a great teammate. We’ve had a fair fight these three years.

"I wanted to win and hear my national song on the podium…but I didn’t know if I would have an opportunity to say thank you to him other than this.

"Because as a racing driver he knows how difficult it is to give up a race victory, and this is to say thank you to Yvan, you are a great champion and still the greatest in the WTCC.”

Muller, whose fight for second in the standings against the three Honda drivers was bolstered by the victory, said it was rare in motorsport for such a gesture from a driver, and that it was not a team order.

“I think it was a very good gesture, I’d like him to do some more,” joked Muller. “We had discussed the possibility yesterday [Saturday].

"In Argentina, I decided myself to give him help [to win] and he wanted to give it back,” he added.

“It’s very rare this kind of gesture in motor racing, and I’m pleased there’s that team spirit in Citroen. Jose and I showed we have a great team spirit and showed the admiration there is in the team.”

With the Thai round set to be cancelled, mathematically Lopez secured his third consecutive WTCC title in Motegi, a feat last achieved by Andy Priaulx in 2007.

"It’s been a fantastic three years for me. Any driver in the world would like to do this, and I’ve been with the best team in the world, with great team-mates, a great family – everything came together these past few years and I have so say thank you to everybody."

The Argentine made his WTCC debut in a one-off at his home race at Termas de Rio Hondo in 2013, went on to dominate the TC1 era after being signed by Citroen for the team's inaugural season in 2014.

In the three years since then, Lopez has fended off challenge from rivals and especially teammate Muller to secure three consecutive titles.

Catsburg hits out at Lopez for Motegi driving standards