Rob Huff, who scored starting position three at the Qualifying, fought for a podium placing that several drivers wanted to reach at the first race.

Friedersdorf/Moscow (rol/ot) The German Team ALL-INKL.COM Muennich Motorsport scored his second podium placing in the premiere season at the FIA World Touring Car Championship on Sunday (9th of June) on the Moscow Raceway. 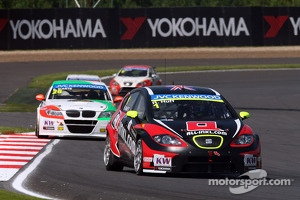 The acting world champion Rob Huff (Great Britain) scored the third place in the 12th race at the WTCC premiere in Moscow in the Seat Léon for the racing stable from Saxony. He finished fourth in the run before.

The British, who is on position five at the drivers ranking at the moment, has been on the podium already in Hungary – as the winner of the race. Winners on the last year opened piste about 80 km western of the Russian capital city have been the championship leader Yvan Muller (France) and the Dane Michel Nykjaer (both Chevrolet Cruze).

The GT1 world champion of last year, Marc Basseng (Neusalza-Spremberg), didn’t make the hoped for points in Moscow and finished on position 14 and 13 in his Seat Léon. Certainly, the driver and team manager (on position 13 at the drivers ranking) got a 30 seconds penalty just like two other drivers by the race management center afterwards because of a false start at the first race.

Rob Huff, who scored starting position three at the Qualifying, fought for a podium placing that several drivers wanted to reach at the first race, which was interrupted for 20 minutes after a crash in the middle of the field at the start.

Similar to that the next race was exciting as well with many laps of fighting for positions, but the acting champion from Great Britain secured the third step of the podium this time.

The second season half of the WTCC starts on the 29th/30 th of June on the „Circuito da Boavista“ in Porto (Portugal) with the runs 13 and 14.