Bamboo Engineering have maintained their second position in the Independent Team Championship.

The Bamboo World Touring Car Team are leaving Russia free from damage and with an independent podium under their belts after a tough weekend at the Moscow Raceway. It was the first time a WTCC race has been run at the Russian circuit and the challenge of a new circuit, along with it’s twisty nature has created challenges for both the drivers and the Silverstone based team. 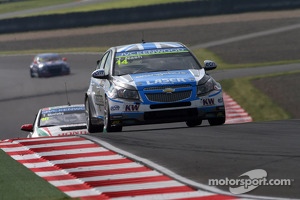 Qualifying saw Nash put in a strong lap in the first of the two sessions to place 6th however it was MacDowall who failed to make the second qualifying session as he was impeded on his flying lap and ended up back in 18th.

The second qualifying session saw all the cars leave the pits in a group and jostling for position, Nash got caught up in a race incident and as he went for his second flying lap, the heavens opened and he had to abort and settle for a disappointing 11th.

The inaugural race of the WTCC in Russia was not short of incident or excitement. Race 1 started with the rolling start as usual however a turn 1 incident collected a number of BMW’s, Nash skirted wide to miss the incident and MacDowall was thanking his lucky stars as he avoided contact with 4 cars to come through unscathed but the damage was enough to warrant a red flag with all cars returning back to the grid.

Nash was in P9 and MacDowall in P16. The restart saw both Nash and MacDowall get away cleanly and maintain their positions until lap 9 when MacDowall lost a place to Basseng whilst making a move on Monterio. Nash started to come under pressure from Chilton but held his nerve and position to the finish.

Race 2 was a standing start with Nash on P10 and MacDowall on p15 as Ng was absent from the front of the grid after his race 1 accident. Nash got a good initial launch but bogged down and dropped a few places, MacDowall had a great start and passed Monteiro to move up to 14th.

Lap 4 saw the BMW of Tom Coronel and Lada of James Thompson collide with the Honda of Gabrielli Tarquini to promote Nash to P10 and MacDowall to P13, however the dominance of the BMW’s on this twisty track became apparent when Nash couldn't hold off D’Aste and O’Young however MacDowall took a place from Basseng to put Nash in P11 and MacDowall in P12. This is how the results stayed until the closing moments of the race when Benanni spun and handed another place to both Bamboo drivers.

James Nash, “It’s always a challenge when you visit a totally new circuit, there is no pre-existing data to refer to and you have to think on your feet. We’ve been bold with our set-up be we were chasing things after a conservative setup earlier in the weekend.“

Alex MacDowall, “I’ve learnt a lot this weekend, not all of it the way I wanted to but I feel I have learnt to relax into my driving and not overdrive. I’m pleased to have made a great start in race 2 and passing Monteiro was an achievement. Porto is next up and I love a good street circuit so I’m looking forward to a good outing.”

Richard Coleman, Chief Executive - Bamboo Engineering, “This weekends results were well below par however we suffer as a team as much as we celebrate as a team. This Russian circuit is very specific and we didn’t really get on top of it, however we really need to understand why we didn’t perform to our best. I will say that I am confident that we’ll be back to top performance in Porto.”

This leaves Nash 4th in the drivers Championship behind Muller, Tarquini and Nykjaer and MacDowall in 9th, Nash is also 2nd in the Yokohama Independent Championship by just one point with MacDowall 3rd. Bamboo Engineering have maintained their second position in the Independent Team Championship.