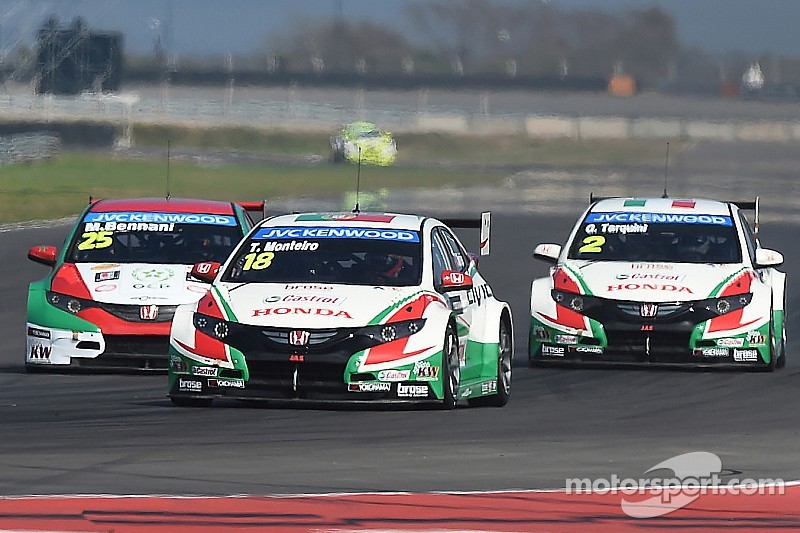 Tiago Monteiro is currently in 4th position in the FIA WTCC Drivers' Championship.

After the long summer break, the 2014 FIA World Touring Car Championship returns for the second half of the season this October.

Four overseas meetings remain: Beijing and Shanghai in China, Suzuka in Japan and the exciting finale held in Macau. But whilst three of these tracks will be familiar to touring car fans, the 2.4km Goldenport Park Circuit in Beijing is an unknown, as it joins the WTCC race calendar for the first time this year. After Beijing, the WTCC caravan then travels 1.100 km south for rounds 19 and 20 at the International Circuit in Shanghai.

Certain tracks may offer us a helping hand, such as the short Goldenport Park Circuit in Beijing.

The last round of the 2014 WTCC was held back in early August, so you could be forgiven for thinking the Castrol Honda World Touring Car Team have been enjoying a well-earned rest. However, the reality is somewhat different. During the downtime, the cars and containers may have been sailing slowly towards the Far East, but drivers Gabriele Tarquini and Tiago Monteiro have on the other hand been hard at work, busy gaining invaluable experience on the 'old' Nürburgring, which joins the WTCC calendar for the first time next year. With preparations for the final 2014 races in the Far East in mind as well, the Honda duo have also completed a number of test sessions at the Hungaroring and Slovakiaring.

"The rules allow us to use additional homologations - the so-called jokers - to improve certain elements of the car, but it is impossible to correct everything in one stroke of the pen", says Alessandro Mariani, managing Director of J.A.S. Motorsport. "So before we apply one particular joker and ensure we're making the right choice, we have to test several options."

"As everybody knows, races in the WTCC follow each other at an infernal pace, so these test sessions were our first opportunity to draw any conclusions on any of them. Chassis-wise we worked on several options during the three days, both with the remaining races and next season in our minds. It is now up to us to convert all the data into actual solutions and close the gap with the competition."

Upgrades for the Civic

Behind the scenes, the Civic WTCC's engine has also received an upgrade, as explains Daisuke Horiuchi, Large Project Leader for WTCC development at Honda R & D: "We have made major steps in the engine development and I am fully confident that we will perform stronger from now on."

Former WTCC-world champion Gabriele Tarquini is fully motivated to exploit these advances and help get the Civic WTCC to the front of the pack.

"We really have to improve now. Certain tracks may offer us a helping hand, such as the short Goldenport Park Circuit in Beijing. However, based on what we know of the Shanghai track, races there will be much more difficult. That's why I will try out different elements that we're working on at different times; some parts for instance might not be fully efficient or effective in the short term, but may bear fruit in the long term. After all, the 2015 season is not that far away."

This one-day event will become one big shoot-out

This is music to the ears of Norbert Michelisz and Mehdi Bennani, drivers of the two private teams Zengõ Motorsport and Proteam Racing, who could be driving an upgraded Civic WTCC in the final races.

"My main target remains getting my first win of 2014", states the Hungarian. "Especially since new parts are now available and we're beginning to fully master the car. We've had a difficult first half of the season as the TC1 is quite a complicated piece of machinery and we've not been able to do much testing, but I can't wait to get behind the wheel of the Civic WTCC in Beijing."

The 17th and 18th rounds of the 2014 FIA WTCC at Beijing Goldenport Park Circuit have a particular timing, with qualifying and racing concertinaed into one busy day. Qualifying takes place on Sunday morning and then shortly afterwards the two races of 26 laps begin!

"This one-day event will become one big shoot-out", says Tiago Monteiro, who currently stands 4th in the Driver's Championship. "For a driver it makes little or no difference whether there is a day between qualifying and the races or not. There is of course less time for analysis and debriefing I always prefer to have a good night's rest to let things sink in a bit but on the other hand you have to stay focussed and there are a lot less distractions if you go straight into a race. The only people who will have a really tough time are the mechanics. If something goes wrong in qualifying and the car needs to be fixed, well, they will have to hurry!"

China comes in a double pack for Muennich Motorsport