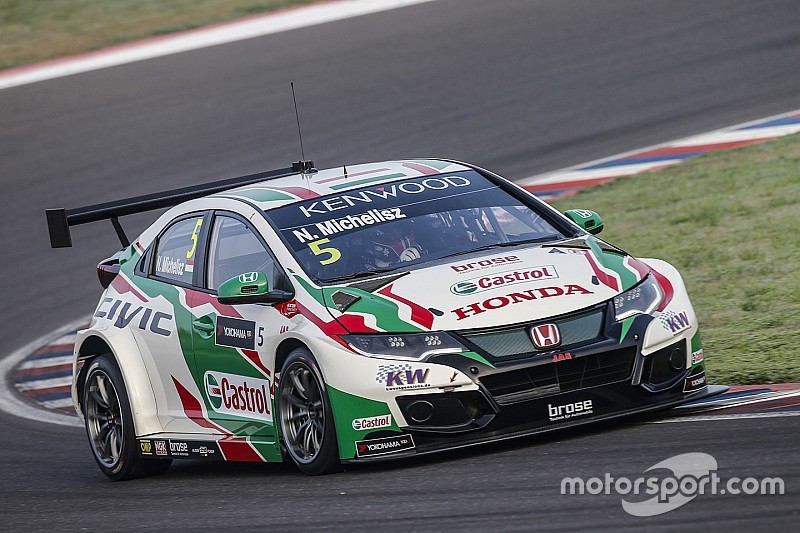 Michelisz failed to score a point in the first race after a puncture of his own on the opening lap, but inherited his second victory in as many WTCC rounds in the second half of the main event as Catsburg suffered a second catastrophic tyre failure of the weekend.

Volvo driver Catsburg jumped away from pole at the start of the race to head the field into the first corner, with Michelisz defending his second place on the grid from teammate Tiago Monteiro.

Having fended off the Portuguese driver's attentions, Michelisz stayed with Catsburg early on but forfeited six tenths of a second to the Dutchman in the space of two laps in the middle of the race, as Catsburg began to build a comfortable lead.

But disaster struck on lap eight of the 13-lap race for Catsburg, who picked up a left-front puncture for a second race in a row, which crushed hopes of a second victory of 2017.

With Monteiro in tow, Michelisz nurtured his Civic home in the closing laps to head a comfortable 1-2 – Honda’s second of the season and its first since the opening round in Marrakech.

Monteiro’s second place allowed him to extend his points lead over third-place finisher Thed Bjork, whose third podium from four races restored some pride for Volvo.

Home Argentinian driver Esteban Guerrieri backed up a podium finish in the opening race with a fine fourth in the main event, finishing five seconds behind Bjork in his Campos Racing Chevrolet Cruze.

Sebastien Loeb Racing teammates Mehdi Bennani and Tom Chilton were separated by the second Volvo of Nestor Girolami, with Chilton dragging his understeering Citroen C-Elysee to seventh after contact at the first corner.

Chilton had finished the opening race first on the road but was demoted to fourth for a brusque move on RC Motorsport driver Yann Ehrlacher for the lead.

He was ahead of the Frenchman fair and square in the second race as Ehrlacher defended from Munnich Motorsport’s Rob Huff for eighth, with Tom Coronel making up the top 10.