While Kawasaki received plenty of flak for filing the protest that led to Toprak Razgatlioglu's Magny-Cours penalty, it's really World Superbike's inflexible approach to track limits to blame for an unsavoury episode, argues Lewis Duncan.

Track limits have become one of the hot topics of motorcycle racing in 2021 as stricter policing in MotoGP and WSBK has led to much rancour from riders, teams, pundits and fans alike regarding the current regulations.

The latest fallout surrounds WSBK and the last round at Magny-Cours, where 2021’s leading riders, Yamaha’s Toprak Razgatlioglu and six-time world champion Jonathan Rea on the Kawasaki, battled hard for victory in all three races in France – the former prevailing in all three contests in stunning fashion.

Razgatlioglu has finally emerged as the rider strong enough to take down the Rea/Kawasaki juggernaut that has ruled WSBK for the last six years – an irony that can’t be lost on the Japanese marque, given Razgatlioglu was once its star of the future.

For the first time all three races went the way of Razgatlioglu, who extended his championship lead originally to 13 points. However, hours after the dust had settled on the thrilling Superpole sprint race in which the Turk deployed his now-famous hard braking techniques to snatch victory away from Rea at the penultimate corner, Race Direction announced that there had been a change in the results.

Razgatlioglu was deemed to have exceeded track limits exiting the 180 Degree corner on the run up the hill towards the Imola chicane. Video replays of the transgression revealed the Yamaha rider marginally touched the green painted strip splitting the track from the grass.

Current track limits regulations state that any rider exceeding track limits on the final lap of a race must drop one place, unless the rider in question suffers a "clear disadvantage". 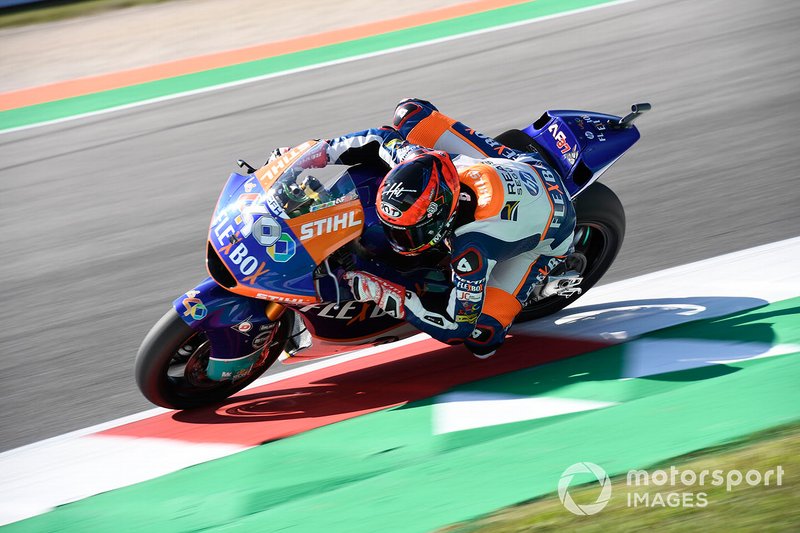 This is a rule that has its origins in the Misano Moto2 race in 2019, when Augusto Fernandez (above) took to the run-off area at the fast Curvone right-hander in his quest to overtake Fabio Di Giannantonio on the final lap. Fernandez was able to line up a pass into Turn 14 two corners later.

The move was investigated, but Fernandez’ victory stood. To avoid setting a precedent, MotoGP introduced the last-lap track limits rule in 2019, while it tightened up policing of track limits in general – with laps being scrubbed for running onto the painted green run-off areas, while long-lap penalties were introduced in 2019 for repeat offenders in races. WSBK adopted these regulations the following year.

In MotoGP, they’ve been a constant source of annoyance amongst riders. While some have actually called for even tougher track limits rules, others have argued that they need a rethink and a more human touch to be deployed.

This is something that has become a particular source of debate since MotoGP introduced its new track sensors to monitor track limits, with a number of riders falling foul in last-lap battles and in qualifying for offences where any advantage gained was questionable at best.

WSBK doesn’t yet operate the sensor system that MotoGP does to police track limits, and as such Razgatlioglu’s offence didn’t even register on Race Direction’s radar at first. It wasn’t until a formal protest was lodged by Kawasaki that the revelation was made and the penalty dished out.

Much anger has been directed at Kawasaki, as well as WSBK Race Direction. But they simply followed the rules, and by the letter of the law Razgatlioglu did commit a punishable offence. The problem is the rule itself is a catch-all that completely goes against the fact that, for the most part, no two incidents are exactly the same. This particularly applies to track limits transgressions.

Kawasaki boss Guim Roda took to Instagram to defend his team's position, noting a mechanic in the garage first spotted Razgatlioglu may have exceeded track limits on the last lap at the Turn 10 kink.

He argued that Kawasaki World Supersport 300 rider Ana Carrasco was hit with a similar penalty at Assen after she was forced to exceed track limits – a point she, quite rightly, wanted to argue with Race Direction. 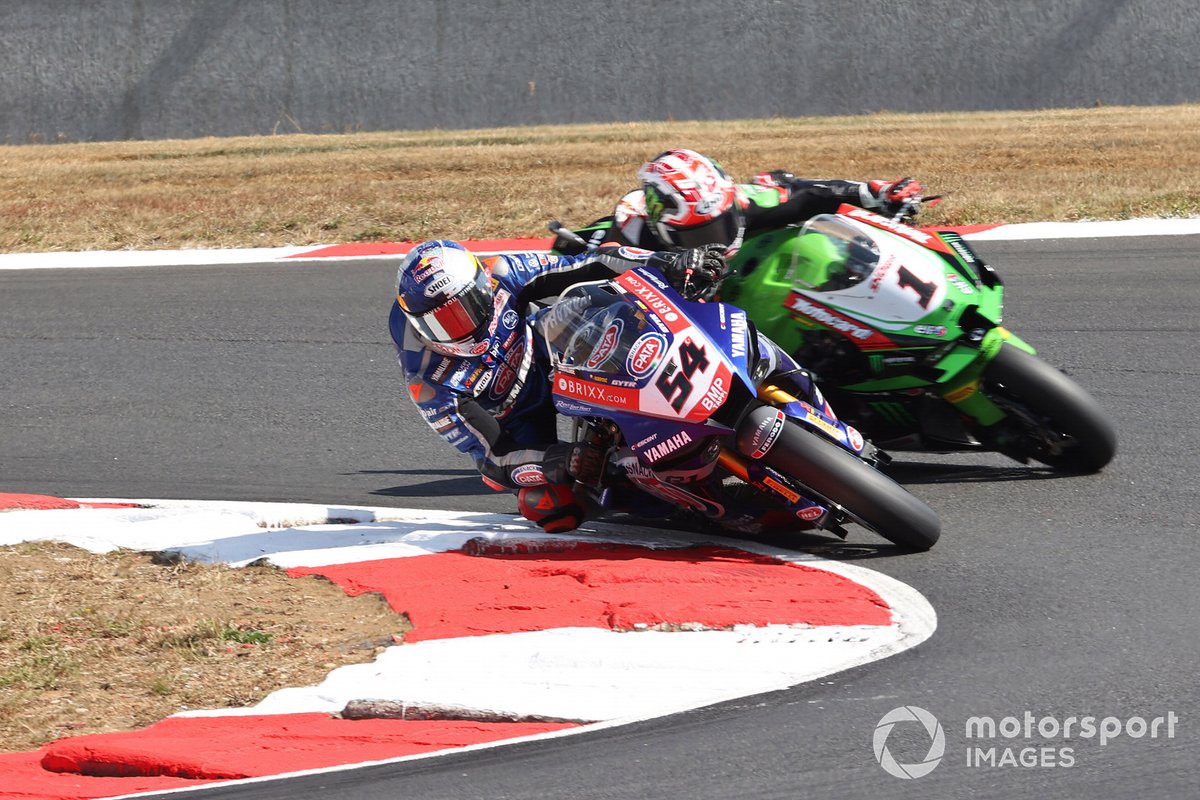 A rule is a rule, but when a rider is forced off track they are not gaining an advantage. MotoGP Race Direction, to its credit, on occasion have recognised this when last-lap battles are concerned – most notably in last year’s Styrian GP, when Jack Miller forced Pol Espargaro wide at the final corner and the latter was not penalised, much to Joan Mir’s annoyance.

This is where a human touch ultimately proved vital. And it can be argued that at Magny-Cours last weekend,  the WSBK stewards could easily have done the same thing.

Roda argued Razgatlioglu would have definitely gained an advantage by touching the green strip through Turn 10. But a video replay shows Razgatlioglu getting slightly out of shape as he applies the throttle, which ultimately robbed him of drive up the hill into the Imola chicane – with Rea overtaking the Yamaha rider as a result. Clearly, no advantage was gained.

Yamaha boss Paul Denning was furious with the decision, not least because he claims the protest is something his own team would never have done had the roles been reversed. "If this is the way Kawasaki want to play, then maybe the sporting atmosphere will change a little bit," he said.

Many have since argued that this kind of thing wouldn’t happen if the green painted run-off areas were replaced with artificial grass, as they used to be. The problem is, artificial grass was removed over safety fears.

After several big accidents at the start of MotoGP races in 2014 – most notably at Aragon – when riders touched wet artificial grass, the decision was taken to remove them. It’s a move that has indirectly opened up the can of worms WSBK faced in France, but the fact is you simply cannot have riders crashing on damp artificial grass when they’re in a pack at the start of races.

And as a result of replacing the artificial grass with tarmac, it is correct that new rules had to be brought in to police track limits. But Magny-Cours made it plainly obvious that the way this rule is enforced needs to be looked into.

The whole incident left a bitter taste after what was another incredible weekend for WSBK. Rea and Razgatlioglu couldn’t be any more different in their riding styles, are both on completely different machinery, and the battles they are offering up are some of the best WSBK has seen in years.

Only adding to the bad optics was Rea’s embracing of Razgatlioglu on the cooldown lap and in parc ferme after the Superpole race, only for him to seemingly go straight to his crew chief Pere Riba to get the team to look into a possible track limits infringement.

Arguably, most racers would have done the same thing in that position, but should he end up winning the championship by the six-point swing he gained from Razgatlioglu’s penalty it will cause a hell of a storm.

It’s clear that the battle lines in the 2021 WSBK title race have been redrawn in the wake of this incident. The respect between both Yamaha and Kawasaki has been tested for the first time this season.

This will only add to the drama of this championship battle, but ultimately the Magny-Cours fallout has done nothing but make WSBK look bad right in the middle of its best title fight in years. And for that, there's nobody to blame except for inflexible rules. 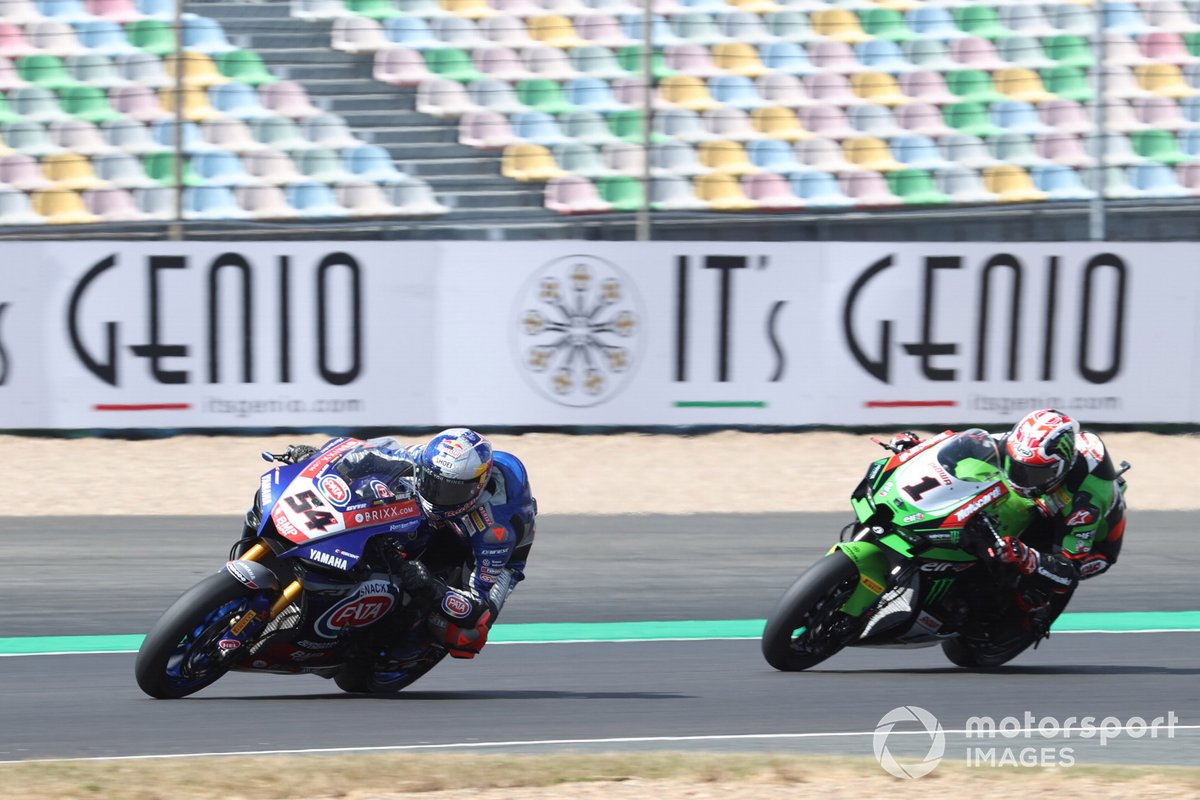 Yamaha boss hits out at Kawasaki after Razgatlioglu penalty