WSBK heads to Algarve for Round 8 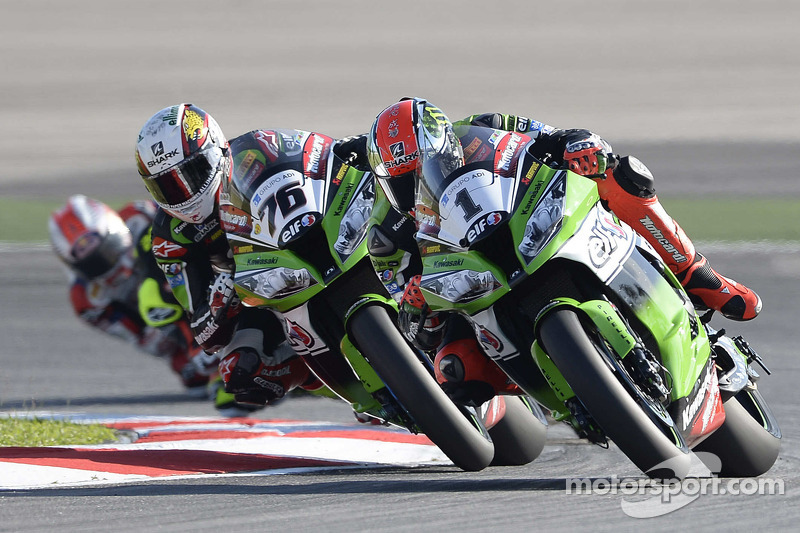 Will Tom Sykes continue his doubles?

The eni FIM Superbike World Championship returns to Portugal’s charming southern coast for the eighth round of the season, which will take place this weekend at the Autodromo Internacional do Algarve in Portimao. The stunning 4.592km racetrack has been part of the World Superbike calendar since 2008, debuting shortly after the circuit’s completion. Given its fast and flowing layout, with many elevation changes and blind crests, the Autodromo Internacional do Algarve has always produced great racing.

Current points leader Tom Sykes (Kawasaki Racing Team) has become a real headache for his opponents following his third double of the season two weekends ago at Misano and he is looking for more at Portimao, where he has won once previously (race one, 2012). The reigning champion has further extended his lead in the standings as he is now 39 and 41 points ahead of Sylvain Guintoli (Aprilia Racing Team) and teammate Loris Baz, respectively.

The two Frenchmen had different results in Italy: Baz was twice second at the flag whilst Guintoli could never really challenge for a podium finish in any of the two encounters at Misano, despite the good form shown in the first two days, finishing 5th and 4th.

For the second round in a row the best classified Aprilia rider was Marco Melandri, who claimed two third places in his second home round of the season. The 31 year old from Ravenna, Italy, has scored 82 of his 179 points in the last two events and with two race wins he is the most successful WSBK active rider at Portimao, along with former teammate in the Yamaha days Eugene Laverty (Voltcom Crescent Suzuki).

Following another disappointing race day in the season, the Irishman hopes to display the same level of performance shown at the start of the year at Portimao, when both he and teammate Alex Lowes were atop the timesheets in the first private test of 2014. Despite taking a historic win on his Suzuki debut Laverty has failed to challenge the front runners on a regular basis, with his younger team mate Lowes often coming home as the lead Suzuki finisher.

Pata Honda’s Jonathan Rea made his WSBK debut at Portimao as he stepped up from World Supersport for the season finale in 2008. The Ulsterman has claimed seven rostrum finishes out of twelve individual races in Algarve but he is still looking for his first win.

Davide Giugliano (Ducati Superbike Team) also had his first World Superbike experience at Portimao in 2011 after clinching the FIM Superstock 1000 title in the penultimate round of the season. Claudio Corti (MV Agusta Reparto Corse) has previously raced at Portimao in STK1000, with a best finish of second scored in 2009.

Portimao will be another new track once again for the Team Hero EBR duo Geoff May and Aaron Yates, who are hoping to improve their performance aboard their 1190RX machines after another disappointing round at Misano.

The battle for the ultimate prize in the EVO class continues as David Salom (Kawasaki Racing Team) is still the man to beat after seven rounds have been completed already. Niccolò Canepa (Team Althea Racing Ducati), Jeremy Guarnoni (MRS Kawasaki), Fabien Foret (Mahi Racing Team India Kawasaki) and the rest of the EVO field will try and challenge the Spaniard for the best placement in the two races at Portimao.

After an impressive return at Misano a fortnight ago, Sylvain Barrier (BMW Motorrad Italia Superbike Team - EVO) is aiming to do even better in Portugal, where he won the STK1000 race last year. Luca Scassa (Team Pedercini Kawasaki – EVO) will be back in action following the injury sustained a few days after the Italian round at Imola in May.

The new adventure of Team Bimota Alstare in the series started at Portimao in March, when Ayrton Badovini and Christian Iddon rode their EVO-spec BB3 machines for the first time during a shakedown test.

The Ducati Superbike Team prepares to race in Portugal this weekend

WSBK riders mix it up at the Portimão beach