WorldSBK is California-bound for the US Round - video 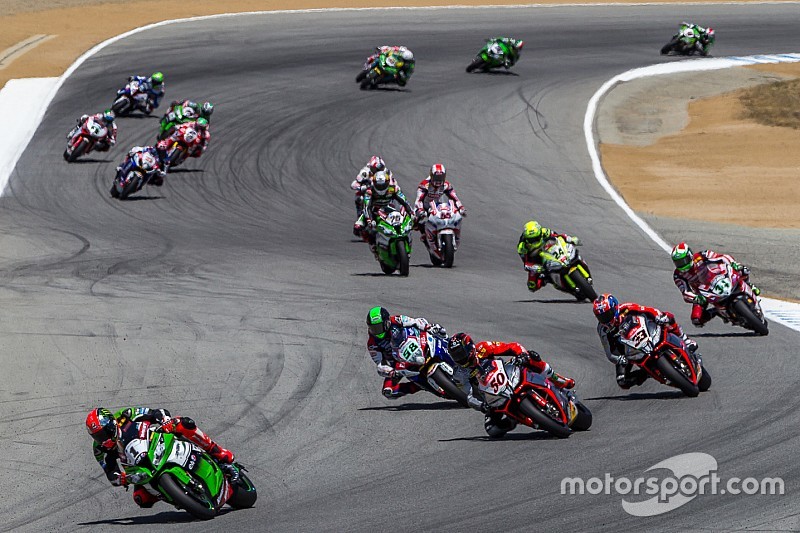 Round 9 of the eni FIM Superbike World Championship season takes the field to the historic Mazda Raceway Laguna Seca for the 13th time. Set on the outstanding Pacific coast of Central California, the venue first hosted ten consecutive WorldSBK events between 1995 and 2004 before returning to the calendar in 2013.

Prior to this, American events for World Superbike were staged at Brainerd International Raceway in Minnesota (1989-1991) and Miller Motorsports Park in Utah (2008-2012). At 2.2 miles (3.6 kilometres) in length, Laguna Seca is the fourth and final anti-clockwise circuit this year after Phillip Island, MotorLand Aragon and Imola.

Having dominated the season so far, Jonathan Rea (Kawasaki Racing Team) has won 11 of the 16 races and finished second in the other five. Almost unbelievably, he is yet to claim a race victory on any of the five circuits that remain on the 2015 calendar (Laguna Seca, Sepang, Jerez, Magny-Cours and Losail); one can imagine that will have changed by the time the curtain falls in Qatar on the night of Sunday 18 October.

Rea is currently on a run of 17 podium finishes. Only Colin Edwards has ever racked up more successive rostrum results, with 25 in 2002; Rea will beat this should he finish inside the top three up to and including Race 1 in Qatar. Should he win seven more races this year (with ten still to go), he would also beat Doug Polen’s long-standing record from 1991 of 17 race wins in a single season.

In terms of Laguna Seca and the current field, one looks to Tom Sykes for success. The 2013 title winner is the only rider on the grid to have previously won at the undulating track, taking one win from each of the previous two years. In 2014, he ended the shortened second race (a seven-lap sprint following two red flag stoppages) with a 44-point championship lead over Sylvain Guintoli. The rest is history…

Staying on the topic of history, it is Australian and American riders who have won more times than any other nationality at Laguna Seca. Competitors from the southern hemisphere country have taken the chequered flag at Laguna on no less than nine occasions, while Americans have won in California seven times. This is not set to change in 2015, with neither Australia nor the United States represented in the category at present. However, this round will be closest to home for Argentina’s Leandro Mercado; while he is yet to compete in WorldSBK at the circuit, he does know it well following his time in AMA road racing. He is looking to return his Barni Racing Team bike to the top 15, having failed to score points in Misano Race 2 for the first time this season.

Elsewhere, 2011 World Champion Carlos Checa – who never finished on the podium at Laguna Seca – completed three days of testing with Ducati Test Team at Mugello two weeks ago, as the Aruba.it Racing-Ducati SBK Team strives for another victory. Chaz Davies and Davide Giugliano have both finished in second place at Laguna Seca, in the pair of 2013 races; in the Italian’s case, he missed out on victory to Eugene Laverty by just one tenth of a second. Nevertheless, Ducati remains the most successful constructor at Laguna Seca, with ten race wins in total.

Another manufacturer in a position to celebrate a significant number this weekend is Kawasaki, which will equal Yamaha’s 74 World Superbike wins should it claim the top spot one more time. With two victories, Kawasaki would become only the third constructor in WorldSBK history to claim 75 race wins, after Ducati and Honda.

As for Leon Haslam, just taking part in Race 1 will be enough for the Aprilia Racing Team – Red Devils man to move into a select club of nine riders to have started 200 races in the World Superbike class. By the time the second race comes, he will equal compatriot James Toseland on 201 starts; only Carl Fogarty would then have more starts to his name as a British rider, as the four-time World Champion competed in 219 races.

With a cushion of 133 points over team-mate Tom Sykes, many argue that Jonathan Rea already has one hand on the title. The same could be said for Kawasaki, whose advantage over nearest rivals Ducati in the Manufacturers’ standings is 122. This confirms that no title can be sewn up in America this weekend, with a maximum of 250 still up for grabs between now and the end of the season.