Rome (Italy), 31st July 2012 – The eni FIM Superbike World Championship returns to the United Kingdom for its second of two appearances this coming weekend, this time right in the middle of Olympic fever, at the legendary Silverstone circuit, approximately 100 kilometres north of London, where the Games are based.

The 25th edition of the production-based championship is turning out to be one of the most competitive of all time: after nine of 14 rounds five riders from five different manufacturers are separated by just 84.5 points (with 250 still up for grabs) and all of them have their minds set on the title. Once again World Superbike is living up to its reputation of being edge-of-seat, down-to-the-wire, unpredictable stuff and more of the same is expected this weekend in the UK. 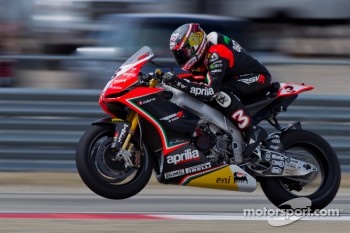 The previous round at Brno bunched up the leading group even further as Marco Melandri (BMW Motorrad Motorsport) cut the gap to leader Max Biaggi (Aprilia Racing Team) to just 21 points. The Italian five-time world champion also lost points to Tom Sykes, Kawasaki Racing Team’s charger (now just 59 points down) and to Carlos Checa (Althea Racing Ducati), the reigning champion who is 67 points behind Biaggi. The group of pretenders for the title is completed by Jonathan Rea (Honda World Superbike Team), 84.5 points off the top slot.

Silverstone will be the venue for a World Superbike round for the ninth time. The track, flat and flowing, appears to be tailor-made for Ducati, which has won here 11 times in 15 races. In last year’s edition Checa powered to a dominant double win: half-way through this season he appeared to be out of the title battle, but by repeating the same result this weekend the Spaniard has every chance of becoming a key player in the title run-in. 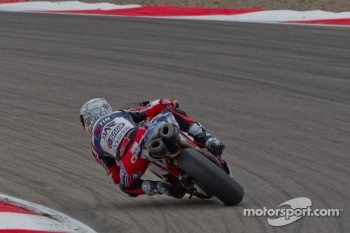 Checa’s hopes of a resurgence are helped by the fact that none of the three riders ahead of him in the standings have a particularly good record at Silverstone. Max Biaggi has never taken a podium at this track and his best result is a fourth place. The Aprilia RSV4 machine has suffered on bumpy tracks like Silverstone in the past and it was also for this reason that a few days ago Aprilia Racing carried out a test at Mugello in preparation for this important round.

With his double triumph at Brno Marco Melandri has now notched up five wins this year with BMW, more than any other rider. He made his Superbike debut in 2011 with Yamaha, twice finishing third, while since its debut in 2009 the German four-cylinder bike has never finished in the top 3 but things have now changed radically: in 2012 the S 1000 RR has been on the podium in every round except Assen.

Neither can Tom Sykes boast particularly brilliant results at the British circuit, and it was just one year ago that he had to abandon the race weekend following a big crash in qualifying. The Kawasaki ZX-10R’s best result here is a seventh place, with Joan Lascorz, but in recent races the Japanese machine has made sensational progress.

Jonathan Rea, the 25-year-old leader of the Honda World Superbike Team, has not won a race since Donington in May this year but he comes to Silverstone in the wake of a fantastic win in the Suzuka 8 Hours as part of the FCC TSR team, one of Honda’s top squads in this endurance racing classic.

Round 10 will also be a fundamental race for FIXI Crescent Suzuki which is yet to obtain results living up to the team’s and the riders’ expectations. American John Hopkins has been sidelined by a series of injuries and crashes, but he returns to the track where one year ago he set pole position as a wild-card and then finished the two races in fifth and seventh. Silverstone is also a ‘friendly’ circuit for Leon Camier who scored a podium place here in 2010 with the Aprilia Racing Team.

The Manufacturers’ title battle is now wide open, after BMW moved into the lead for the first time ever at Brno by two points over Aprilia but Ducati (15.5 points behind) are still in with a big chance. Kawasaki, Honda and Suzuki on the other hand are some way behind.

The forecast for the weekend looks like cool weather and showers, conditions that could bring out the best in Davide Giugliano (Althea Racing Ducati), the 22-year-old rookie who has already stepped onto the podium twice this year. Niccolò Canepa will also be back on his regular Red Devils Ducati machine after missing out on Brno, while in the Pata Racing Ducati team, Lorenzo Zanetti is joined by new signing Sylvain Guintoli, winner at Assen when he was in Ducati Liberty Team Effenbert.

Uncertainty also reigns in the battle for the World Supersport crown. After eight rounds of 13 Turkish rider Kenan Sofuoglu (Kawasaki Lorenzini) is tenaciously holding on to his leadership despite injuries and penalties that have slowed his progress down in the last few rounds. The two-time winner has a 23-point lead over British rider Sam Lowes (Bogdanka PTR Honda) whose copybook has been blotted with two no-scores at Assen and Misano. His home track will give Lowes a good opportunity to close the gap. Two Frenchmen with the same aim are Fabien Foret (Kawasaki Intermoto Step), galvanized by his win at Brno, and Jules Cluzel (PTR Honda) while Broc Parkes (Ten Kate Racing Products Honda) is not far off the top either but with five rounds to go these three must now pull out all the stops to remain in touch with the leaders. Newcomers on the Supersport scene at this round will include Britain’s Dan Linfoot in the newly-formed Kawasaki MSD R-N India team and Moto2 rider Kenny Noyes from the USA on a WK Hampshire Racing Suzuki.

The FIM Superstock 1000 Cup arrives at its seventh round of 10 with Eddi La Marra (Barni Racing Team Italia Ducati) at the top of the table with a 19-point lead over Sylvain Barrier of the BMW Motorrad Italia GoldBet team. The 23-year-old Italian made the break with a second place in the wet at Brno, capitalizing on the French rider’s second successive crash. But after recent results the leading duo now have to keep an eye on Australian Bryan Staring, winner of the last two races. The 25-year-old Kawasaki Pedercini rider from Perth is riding brilliantly and is just 24 points off the top slot. Further down the field and more or less out of contention are Lorenzo Savadori (Barni Racing Team Italia Ducati) and Jeremy Guarnoni (MRS Kawasaki), who however is rapidly becoming a frontrunner at this level.

The battle between the Netherlands and Italy continues unabated in the European Superstock 600 Championship. After six rounds of 10 in the under-22 category, the 19-year-old Dutchman Michael van der Mark (EAB Ten Kate Junior Team Honda) heads the field, but by just two points over his fellow 19-year-old competitor Riccardo Russo (Team Italia FMI Yamaha). With three wins apiece, two of the most interesting young talents in Europe have made the championship their own this year and they now have a virtually unassailable lead over Belgium’s Gauthier Duwelz (MTM Racing Yamaha), who is however rapidly emerging in his own way with four podiums in the six races. Last weekend Russo was unable to clinch the Italian CIV title at Misano, as both wins went to Franco Morbidelli (Bike Service R.T. Yamaha) who will be racing as a wild-card at Silverstone.

The last race on the Silverstone weekend programme will be the sixth round (of 8) of the KTM European Junior Cup, the one-make trophy series reserved for talented under-19 youngsters. In the previous round at Brno Austria’s Lukas Wimmer powered back to the top of the table and now has an eight-point lead over Javier Orellana. The Spanish rider, who turned 15 last Friday, has already had some experience in the KTM Red Bull 125GP series but is also performing well on the Duke 690 machines directly supplied by the Mattighofen factory.