Baz and Guintoli celebrate despite the weather

A remarkable day, thanks to the ever changing British weather conditions, saw two French riders on top at Silverstone in round ten of the eni FIM Superbike Championship in front of a weekend crowd of 42,000. In the first race SBK rookie Loris Baz (Kawasaki Racing Team) became the second youngest rider ever to win at this level, with the nineteen-year-old, who started the season in the Superstock 1000 FIM Cup, overcoming the changing conditions to win a close run thing.

In the second race a rider who parted way with one Ducati team at the recent Brno round and found a berth in the Pata Racing Team - Sylvain Guintoli - posted his second win of the year on a Ducati 1098R in horrendous conditions after a delayed and shortened race two.

The biggest names were all left struggling in both qualifying and races as the track conditions shifted from dry and sunny to fully wet, and everything in between. Points leader Max Biaggi (Aprilia Racing) was a non-finisher in race one, then only 11th in race two. Marco Melandri (BMW Motorrad Motorsport) is now only 10.5 points from Biaggi after finishing seventh and then eighth. Tom Sykes (Kawasaki Racing Team) was eighth and 12th at his home round, Carlos Checa (Althea Racing Ducati) was fifth and sixth, despite crashing late in race two, then being included in the results on the lap count back. 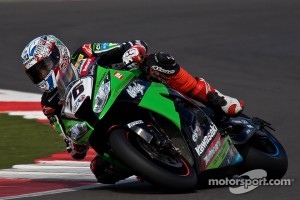 Baz won after weather conditions played an ever-changing role in the first 18–lap race of the day. The first attempt to run it was halted after two separate crashes, and the restart was declared wet, but with a mostly dry track surface visible over the length of the circuit. Light rains came and went as the lead changed a bewildering number of times, but with a few laps to go the rains got even heavier and rider movements forward and back got even more frenzied. Over the line for the last time, Baz won by 0.383 seconds, with BMW Motorrad Italia GoldBet duo Michel Fabrizio and Ayrton Badovini second and third respectively and Jonathan Rea (Honda World Superbike Team) fourth. As Badovini crossed the line he fell on the edge of the track and the following Rea also crashed into Badovini’s machine, but after each had crossed the line. Checa was fifth, but championship leader Biaggi was a late faller and he no-scored.

Loris Baz: “At the beginning it was full dry and I was missing grip but when I saw the rain coming I kept pushing to the front. It was hard at the end because it was wet, but I stayed on the bike and I’m really happy. A big thanks for the team and our thoughts go out to Joan Lascorz.”

Michel Fabrizio: “It was the craziest race but I’m very happy to be on the podium. I don’t know what clicked in my head! We have to be happy with the first podiums this year for our team, and my team-mate was here with me as well so it’s a great result! I feel sure I was in a position to win, but there was only one problem, Baz!”

Ayrton Badovini: “It’s incredible! Finishing without a bike is crazy! I’m happy because I started from 18th position, but with these conditions I could push and I saw that the conditions were changing. A great result for me and my team.” 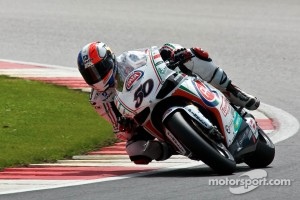 Guintoli was declared the winner of an eight-lap second race after the rains fell so hard that three rider fell on the same part of the track, and the red flag was shown. Half points were awarded to the top 15 riders. Baz had been in the lead on the lap that the flag was shown but he had fallen shortly before, so on the countback he was credited with second. Third went to long time second place rider Jakub Smrz (Liberty Racing Team Effenbert) with Aprilia Racing rider Eugene Laverty, who was 16 seconds behind rain master Guintoli when the flag went out, fourth. Maxime Berger (Team Effenbert Liberty Racing Ducati) was fifth, Chaz Davies (ParkinGO MTC Aprilia) was eventually classified seventh.

Sylvain Guintoli: “What a day, what a last couple of weeks actually! It’s been an up and down road after Brno, but I’ve just bounced back quickly with the Pata team and Ducati. I made the wrong choice of tyre in the first race, but in race 2 I went from zero to hero! I was really angry with myself at the start then when the rains came I eased off for the podium because I didn’t want to go from zero to zero! It’s my first win with Pata and hopefully there are many more to come!”

Loris Baz: “A fantastic weekend, in the beginning it was not so wet and I was saving the tyres for the big rain to come, but Kuba and Sylvain were fast. I passed them then I crashed without doing nothing because there was fuel and oil on the track. A big thanks to the team, they are doing a great job, also Kawasaki!”

Jakub Smrz: “I’m really happy because it was a tough Sunday for us. I was taken down in race 1 and we were still fixing the bike and had no time to get new parts. In race 2 it was good, I was together with Sylvain, we were fast but there was so much rain that I just crashed without doing nothing. I’m happy that they counted the end of the race one lap before and this is the first podium for me this year.”

"We knew that the weekend on English soil might hold some surprises for us due to particularly unpredictable weather, and that is exactly what happened. In fact, the English summer proved to be particularly treacherous for the riders who had to face extremely demanding racing conditions due to the periodic rain showers on the track. Despite the adverse weather we can definitely consider ourselves to be very satisfied with the solutions we brought to Silverstone. In Race 1 for the Superbike class we had further confirmation of the quality and versatility of the rear R302 solution in SC1 compound which was used by most of the riders for the first start.

Not only that, but for the second start of Race 1 some of the riders gambled on a wet tyre even if there were no optimum rain conditions to justify using it and, in spite of this, they were able to finish the race. Race 2 was naturally ridden by all the riders on wet tyres which confirmed their excellent performance when used in the rain, the very purpose for which they were designed. There was definitely no lack of show and, once again, Superbike showed that it is a Championship where any rider has the potential to win.

This weekend belonged to Loris Baz and the Kawasaki Racing Team, whom I would like to compliment, but also other outsider riders such as Michel Fabrizio and Ayrton Badovini with Team BMW Motorrad Italia Goldbet. There are just four races left until the end of the Championship, but the general standings are anything but decided. Anything can still happen and it will be interesting to see who is able to prevail over the rivals." - Giorgio Barbier, Racing Director Pirelli Moto

Biaggi just edges out Sykes to grab his second championship