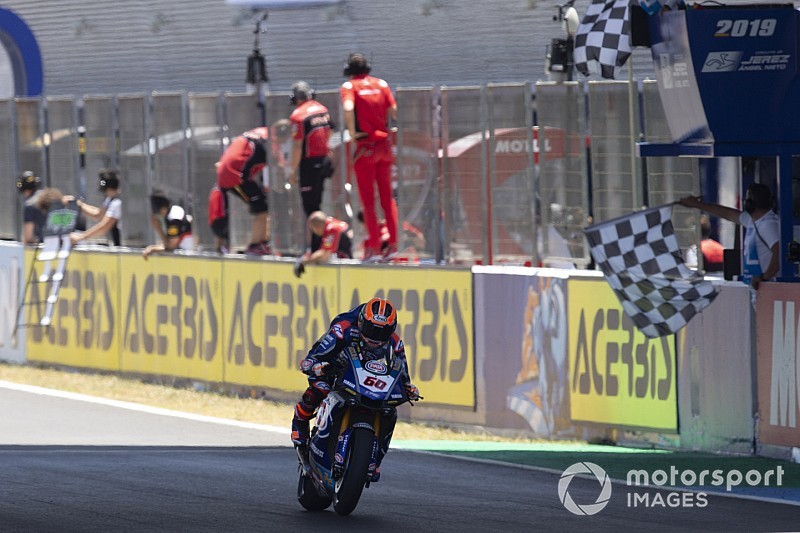 Yamaha rider Michael van der Mark took his first win of the World Superbike season in a red-flagged final race at Jerez, as Alvaro Bautista crashed on the second lap.

Ducati rider Bautista, who dominated the first two races of the Jerez weekend, lost the lead to Marco Melandri's GRT Yamaha at the start but retook the position at Turn 5.

But Bautista ended up crashing at the first corner next time around, giving the lead to his main title rival Jonathan Rea.

Bautista's crash was followed by a duel between Rea and van der Mark, who was all over the Kawasaki rider.

After an overtake at Turn 6 was quickly countered by Rea, van der Mark spent several laps in second before making another move on lap 7.

Rea then also put pressure on van der Mark, the duo separated by less than half a second for eight laps. But Rea started to struggle in the lattet stages and van der Mark built a lead of two seconds in just two laps.

Van der Mark rode on his own for the rest of the race, which was shortened by two laps due to a red flag coming out after Ryuichi Kiyonari crashed at Turn 11, throwing lots of gravel on track.

The Dutchman secured his third WSBK win, his first since his Donington Park double last year.

Puccetti Kawasaki's Toprak Razgatlioglu couldn't fight for the win but comfortably scored the second podium finish of his campaign in third.

His top-three finish was secured when Melandri and Chaz Davies, the two riders he was riding with early on, crashed.

Melandri divebombed on the inside of Ducati rider Davies at the fast Turn 5 right-hander, forcing both of them off-track.

Alex Lowes (Yamaha) crashed two corners into the race but rejoined the track and finished 14th, two laps down.

Despite his first retirement of the season, Bautista still maintains a sizable 41-point lead over Rea in the standings.