Due to the pain Ayrton Badovini was suffering in the first half of that first race, he decided not to compete in the day’s second race.

Istanbul (Turkey) - Despite physical problems resulting from Friday’s crash, Ayrton Badovini (Team SBK Ducati Alstare) attempted to participate in today’s Superbike races at Intercity Istanbul Park in Turkey. Unfortunately a technical stop in race 1 put paid to his chances of scoring points and, due to the pain he was suffering in the first half of that first race, he decided not to compete in the day’s second race. 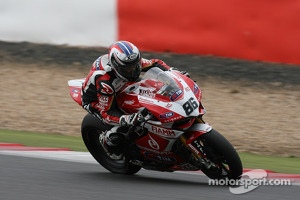 Badovini suffered strained ligaments and swelling in his left ankle after a crash at turn 12 in Friday morning’s practice. Having not completed the qualifying sessions yesterday, the Ducati Alstare rider managed to get his boot on this morning despite the injury. He was therefore able to make a few laps during warm-up to assess whether he would be able to race later in the day.

Race 1 – Badovini lined up at the back of the grid, in sixteenth position, due to the fact that he did not participate in either of the qualifying sessions as a result of the injury. Making a good start, he was already up in thirteenth position by the end of the first lap. He held this position for the first eight laps but unfortunately, during the course of lap nine, he was forced to return to the garage due to a technical problem and was unable to rejoin the race.

Ayrton Badovini: “It’s a pity about the stop, today was a chance to make some laps and get to grips with this track. It would have been difficult to finish the race anyway due to my physical condition but I wanted to try at least. I was also having some grip issues because, having completed only one practice session, we didn't have time to identify the best set-up for our bike on this new track. Unfortunately a weekend to forget…”

Carlos Checa was unfortunately absent from today’s races, having crashed on Friday and suffering a contusion to the thorax and suspected fracture of the scaphoid as a result. He flew to Barcelona this morning where he will receive further treatment.

Laverty doubles up with victory in race 2 at Istanbul

A not expected result in Istambul for BMW Motorrad