Sylvain Guintoli (Aprilia Racing Team) has won the second race of the eni FIM Superbike World Championship at Phillip Island, his career's fifth in the series, in front of the 56,515 spectators attending the event. The Frenchman, now Championship leader after the opening round, was in first place on lap 15 when the race was red flagged, following the technical problem suffered by race 1 winner Eugene Laverty. The Irishman's GSX-R 1000 engine blew as he was running second ahead of Kawasaki Racing Team pairing of Loriz Baz and reigning Champion Tom Sykes, who claimed the remaining podium positions.

Sylvain Guintoli: "I pushed a bit too much in Race 1, I started off really strong but towards the end I couldn't keep the same pace. Track conditions were a lot different from the previous days, but we did a good job anyway. In the second race, I tried to save the tyre a bit and it worked out. Considering what happened to me during the weekend I can't be but happy about this round as I finally managed to get back on the top step of the podium. I would like to thank the people who assisted me during my recovery, I feel quite tired now but there is a long break before the next race to be fully fit." 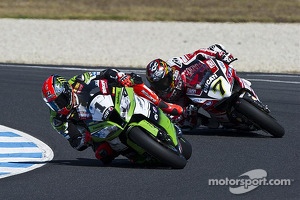 WSBK will return to Laguna Seca

High stakes for the penultimate round at Magny-Cours