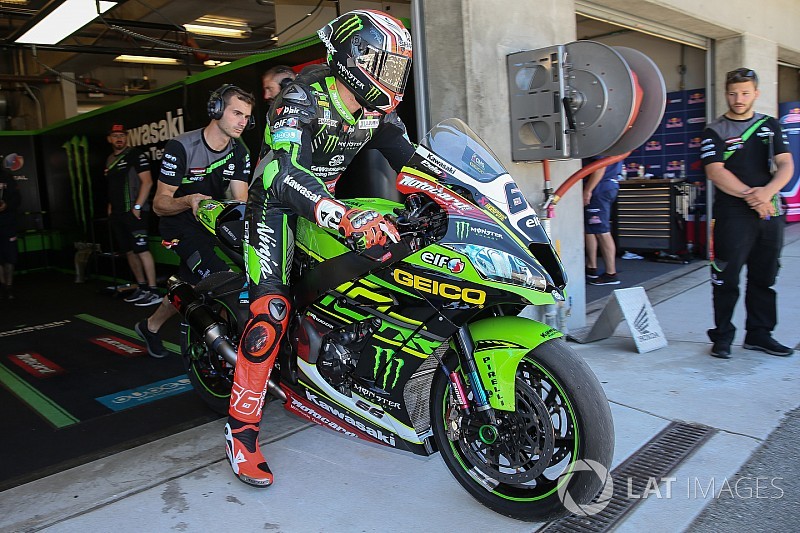 Tom Sykes has blamed Jonathan Rea's World Superbike crew chief Pere Riba for the tension between the pair, as well as past fallouts within the Kawasaki outfit.

The bitterness between Sykes and Rea was reignited at Brno when the pair collided in the early stages of Race 2, which resulted in a DNF for Rea.

Although the clash was deemed a racing incident by the stewards, the two riders exchanged barbs speaking to the media, with Rea saying Sykes's “intention was clear”.

Sykes blames the tension that has long existed between himself and Rea, as well as with past Kawasaki teammates Joan Lascorz (whom he partnered in 2011-12) and Loris Baz (12-14) on Riba.

“Yeah, it's strange really, the history goes back a long way, not between me and Jonathan but also my teammates at Kawasaki, which is a shame,” Sykes said in an interview with Eurosport.

“I had a great relationship with Joan Lascorz and Loris Baz starting out. I put it down to one man, Pere Riba.

“It's just the way he goes about business is terrible, and unfortunately he cannot be tamed inside this environment and it's a big shame because there's no need for it. It's a team at the end of the day.”

Sykes admits he was “disappointed” with Rea's trackside gestures towards him directly after the Brno incident, and feels he tried to “degrade” him in the press.

“Arrogance is one thing I suppose and that's not the case, I didn't owe an apology,” he added. “I was in front on the racing line at the time minding my own business.

"All I can say is I was very disappointed from such a talented rider – I've seen the replay of him at the side of the track – which is probably embarrassing for him now looking back, if I'm being honest.

“And disappointed to see his comments, he got very personal with a few journalists and really tried to degrade me as a rider, which shows the level of his mentality.”

Rea urges Sykes to "get over it"

Rea feels Sykes needs to “get over” the incident, and says the atmosphere within the team will be fine so long as the pair “can be respectful” and keep Kawasaki's best interests in mind.

“You can talk about it all day, there's two points of view; it's my point of view and his point of view," said Rea of the incident.

“I can respect his point of view, but he should respect mine and move on. It was contact, get over it.

“I don't need to come to work and be friends with anybody. I've got my best friends at home. I know how much is at stake when you win races and lose races, and my inner circle is tight and him or his team are not part of that.

“So I couldn't care less about what anyone thought of me. It's important to me what my fans think, what the people I respect think.

“As long as we can be respectful and work together with Kawasaki, it's fine.”