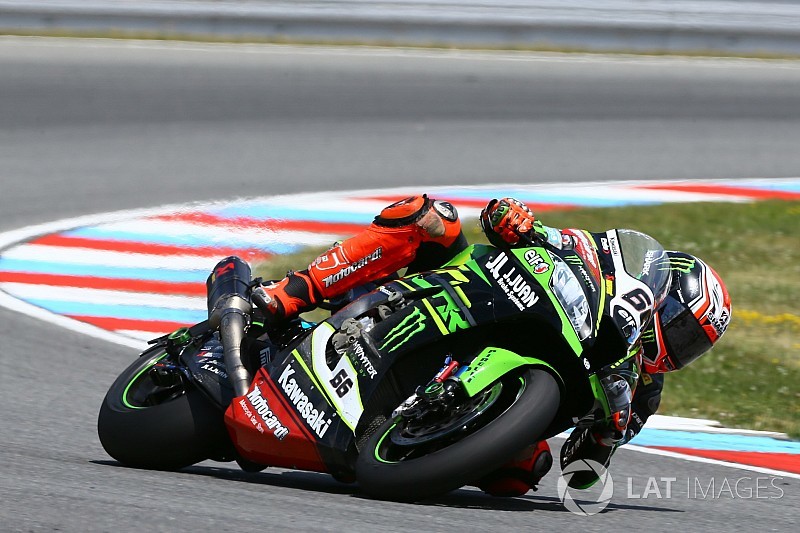 Jonathan Rea says the “intention” of his Kawasaki World Superbike teammate Tom Sykes “was clear” after a collision between the pair at Brno.

Rea and Sykes were battling their way through from row three in the early stages of Sunday's Czech race, with the latter heading Rea in sixth spot.

A lunge from Rea on lap three at Turn 11 sent him wide for Turn 12, and as Sykes cut back to retake his position the pair connected, with Rea crashing.

The clash was deemed a racing incident, but Rea says “it is very clear” he was not at fault, and doesn't understand 'what was in Sykes' brain' during the collision.

“Blaming me? I don't understand how, I'm on the outside of the corner, how I could cause the crash,” Rea fumed when told Sykes blamed him.

"Clever people know what happened, I was on the outside of the corner completely through.

“From his onboard [camera] he came from behind and hit me on the side, when he had space to go more on the inside and square off the corner like [Eugene] Laverty in front.

“He was much wider than Laverty in front. The intention was clear, I just don't understand why it was in his brain to not give me room when I was already through.

“I can't accept the blame, it's ludicrous putting it on me. I can't understand this guy sometimes.

“I went down because there was contact, that happens in racing. But looks like I'm not going to get an apology either, so it's one of them.”

Sykes – who finished 16th after a fall on lap six – blasted Rea's move as “uncalculated”, and says the defending champion should have been more wary when re-joining the racing line.

"It looks like there's people making a big deal out of this,” Sykes said. “The long and short is he [Rea] made an uncalculated pass, ran wide and obviously I focused on me exit up the hill.

“He looked to obviously cut back, he was off the line, tried to cut it back onto the racing line and I was there. People can say what they want, but there was nothing to it, it was a racing incident.

“But you can see when he passes me into the right, he goes in there too fast and my bike never changes angle.

“There's a couple of bumps and you see the camera moving, but it never changes the degree [of lean angle], it's a nice linear pick-up.

“So if there was anything like that you'd see it on the camera. So the fact is he made a mistake."

He added: “If I pass somebody on the inside and run wide, when I cut it back... you've always got to check, in the early laps there's no gaps.

“So first thing I do, check if the line is clear, because it's you that's made the mistake. And second of all, if you want to give it full gas just stay half a metre off the racing line and you'll have no problem.

“But I just think it was obviously a miscalculation on his behalf and it looks like I'm the one being blamed. It's one of those and it's certainly not my fault.”

Davies: Staying at Ducati a "risk" with V4 bike