Sykes claims his first Superpole of the season 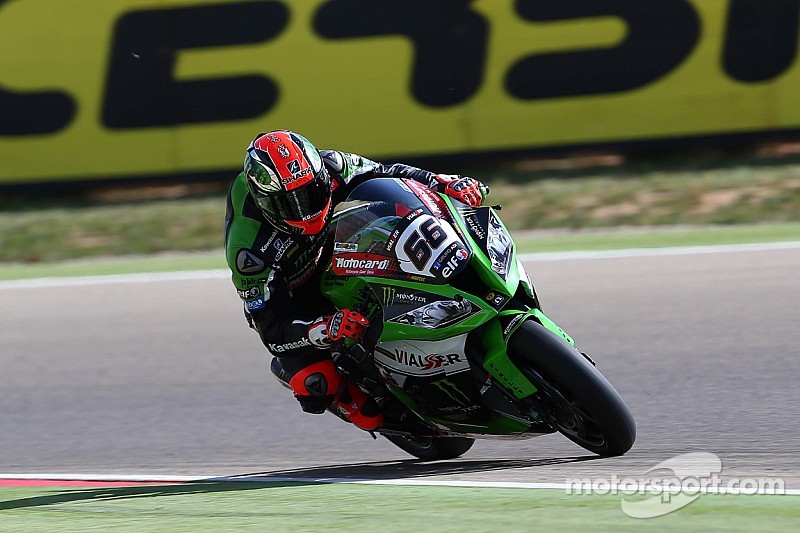 Tom Sykes (Kawasaki Racing Team) has won his first Tissot-Superpole of the season after a tense final 15-minute shoot-out in Assen. The 4.542km Cathedral of Speed once again produced an exciting climax to the WorldSBK qualifying session in which the top-8 riders on the grid for tomorrow’s two 21 lap races were covered by a second. Today’s Pole Position is the 25th of Tom’s career, his first since Magny-Cours 2014. Joining Sykes on the front row will be his team mate Jonathan Rea and Leon Haslam (Aprilia Racing Team – Red Devils).

On the third row of the grid Xavi Fores (Aruba.it Racing Ducati SBK Team) will line up alongside Jordi Torres (Aprilia Racing Team – Red Devils) and Sylvain Guintoli (Pata Honda World Superbike Team) in what was the most closely fought Tissot-Superpole of the season so far.

“We are definitely getting there now. It feels that this pole has been a long time coming but I am very happy. In Aragon we had a small indication that the Ninja ZX-10R and myself are starting to work as one package again. I know we can still improve the Ninja underneath me but as long as we can keep working in this direction, I am happy. A lot of credit has to go to my crew chief Marcel and the boys in the garage. We have had the mechanics working hard and making a lot of changes. We have definitely got the speed and now I want that speed for 20 more laps here.”

"I am happy to be on the front row because it is important here at Assen and also I have a strong race pace so it gives me a chance to be in the front at least. My lap was a good one but I made some small mistakes. Tom did a good job and that is an impressive lap time with the 2015 regulations in place. I really did want the pole position today because when I felt the qualifying tyre on the out lap, I though I could give it a go. I just overcooked it in T1 and it upset the next two corners. When I saw the lap time I knew we could be competitive for the front row but not for pole position.”

"Today was really good and we tried a few little things in set-up this morning, trying to solve a couple of problems we had yesterday. We found a good solution and I was pretty quick in FP3 and then even faster in FP4. We were quite consistent, too, so I was very happy with that. In final qualifying of Superpole I think my lap could have been a little faster but I’m quite happy with P5. To be on the second row for my home round is a good position to start. Our race pace is OK, although we still need to find a couple of tenths, but I’m quite confident for the races tomorrow."

Provisional pole for Davies and the Aruba.it Racing at Assen