Sykes and Laverty take one win each at Assen

On the TT Circuit in Assen, Tom Sykes and Eugene Laverty split the race victories in FIM Superbike World Championship double race event in The Netherlands. Sam Lowes took the win to the wire over Kenan Sofuoglu in the Supersport race.

Assen (The Netherlands), Sunday 28 April 2013 – The eni FIM Superbike World Championship has put in today another great show as riders from four of the five classes battled out for the best positioning in the respective races in front of an enthusiastic crowd (that reached a total of 52.000 spectators over the whole weekend). Blue skies characterised the last day on track for the joy of all riders, starting from Tom Sykes (Kawasaki Racing Team), who was able to set a new lap record for the Superbike class in race 1 and to win by domination ahead of Jonathan Rea (Pata Honda World Superbike) – previous lap record holder from 2010 – and Eugene Laverty.

The Irishman, together with his Aprilia Racing Team crew, found the right set-up adjustments to match Sykes’ pace in Race 2 and thanks to a last-lap manoeuvre was able to snatch victory from today’s pole-sitter. 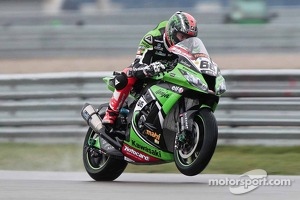 Tom Sykes got the 6th race win of his career - the 1st of 2013 after a lonely race at the front, thanks to an incredible pace that allowed him to pull away from the chasing pack in the early laps. The 27 year old from Huddersfield has given Kawasaki the first victory after 7 long years: last time out was Chris Walker, in 2006, to win Race 1 on the iconic Dutch circuit.

Tom Sykes: “The bike was working well and was very consistent today. Race one was great for us and we did all we could. To be honest I surprised myself a little but the Ninja ZX-10R is working great. That first race was nice and believe me, to see that pit board gap get bigger every lap is magical for a rider. When Eugene came past me in race two I realised it was much easier to follow than to lead round here and it was just unfortunate that exiting the final chicane on the last lap I hit the kerb on the inside when I was trying to pass him, and I was out of the seat.”

Jonathan Rea finished with a solid 2nd place after a successful overtaking manoeuvre on Sylvain Guintoli (Aprilia Racing Team) at Turn 13. Second works Aprilia rider Eugene Laverty was part of the 3-way battle for 2nd place but had some hard time in the last part of the race.

Loris Baz (Kawasaki Racing Team) was 5th at the chequered flag ahead of Davide Giugliano (Althea Racing Aprilia), who was very competitive in the early laps but couldn't keep the pace of the leaders as the race progressed.

BMW’s unlucky race saw Chaz Davies lining-up on the last row of the grid after the warm-up crash that forced his crew to a quick rebuild of his BMW S 1000 RR. The Welshman made his way up to a 7th place finish after a good start. An unfortunate Marco Melandri - who was supported today by six-time World Motocross Champion and close friend Tony Cairoli - suffered a technical problem on his bike during the warm-up lap and was forced to pull in before the start of the race.

A close battle between race 1 winner Tom Sykes and Eugene Laverty, who pulled away at the front in the early laps. Sykes stayed on the lead until lap 19, when Laverty decided to take the plunge and made a move on the Brit at Turn 6. Sykes managed to stay with the Irishman until the end and tried his final shot at the win at Turn 16, with the two riders crossing the line side by side. A 0.089 seconds margin allowed Eugene Laverty to score his 5th career win, the 2nd this year after Phillip Island Race 2.

Eugene Laverty: “The little time we had with a dry track created a few problems in Race 1. In fact, before the second race we made some changes to the RSV4, which we usually don't do because of how risky that is. Actually the changes made worked really well. Despite feeling very comfortable on the bike I didn't think I would have stayed with Sykes. But in the end I was able to keep up with his pace. Four laps from the end I overtook Tom, even pulling away a few metres, but then the wind kept me from being precise so he was able to cling back onto me. Winning today was important. We back in the fight for the championship and we were able to leave the troubles from Aragón behind us.”

Loris Baz successfully defended his 3rd place over Jonathan Rea, who ended on a positive note a difficult round for the Pata Honda Team. A below-par race for Chaz Davies and Sylvain Guintoli, 5th and 6th respectively at the chequered flag.

Leon Camier (FIXI Crescent Suzuki) rode bravely from last place on the grid to a 7th place finish, while his team mate Jules Cluzel was forced to pull in during lap 16 due to a technical problem. Marco Melandri (BMW Motorrad GoldBet) had a perfect start of the race but struggled to keep the pace, eventually finishing 8th ahead of Michel Fabrizio (Red Devils Roma Aprilia) and Carlos Checa (Team Ducati Alstare). An unfortunate Davide Giugliano crashed out of Turn 2 during lap 6, while he was in 3rd place. The Italian rider was OK straight after the crash unlike his Aprilia RSV4 that went on fire.

After the disappointment of the Aragon round, Sam Lowes (Yakhnich Motorsport Yamaha) and reigning Champion Kenan Sofuoglu (Mahi Racing Team India Kawasaki) were back at the front for a two-way fight for race win at TT Circuit of Assen. The two riders shared the lead over the course of the 21 laps, but it wasn’t until the last lap that the final battle took place: Sofuoglu overpowered Lowes on the straight that leads to Turn 6, but couldn't do much when Lowes got along the inside of him - entering the last chicane - to cross the line in 1st place.

Championship leader Fabien Foret (Mahi Racing Team India Kawasaki) got an important 3rd place finish despite the 7.2 seconds gap from the lead at the chequered flag. The Frenchman looked strong halfway through the race, closing the gap with the front runners before eventually falling back. Michael van der Mark (Pata Honda World Supersport) got a terrible start of the race from the 11th grid slot, but was able to make his way through the field to a final 4th.

Florian Marino (Intermoto Ponyexpres Kawasaki), substitute for injured David Salom, rode a great race finish 5th ahead of Roberto Rolfo (ParkinGO MV Agusta Corse), who got his best finish so far in 2013, and Jack Kennedy (Rivamoto Honda), early protagonist of the race before losing a lot of ground.