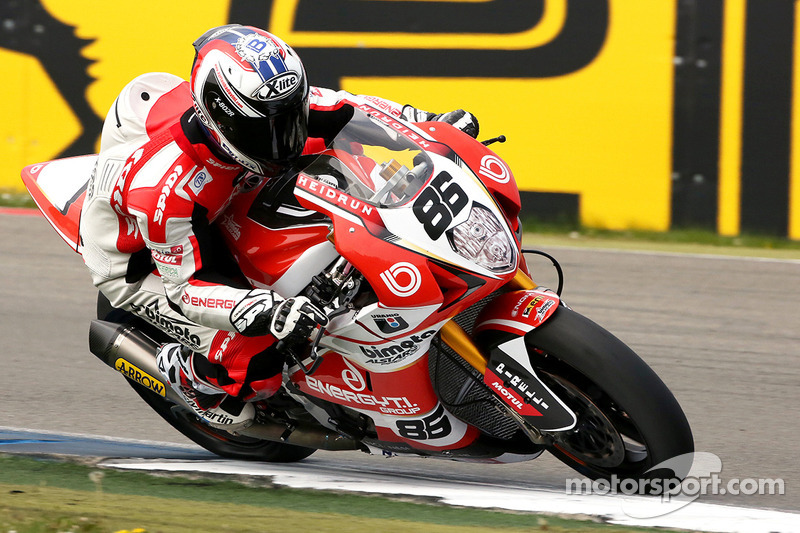 In the first race, Ayrton Badovini ended 12s in front of the nearest EVO class rider and in race two the margin between him and the next EVO rider was eight seconds.

Team Bimota Alstare Bimota rider Ayrton Badovini won the EVO class in both World Superbike races at Donington today on the continually improving BB3. He finished 10th overall in race one and then went even better in race two, finishing 9th overall. In the first race, he ended twelve seconds in front of the nearest EVO class rider and in race two the margin between him and the next EVO rider was eight seconds.

His team mate, Christian Iddon’s first race ended after just four laps when he lost the front end and crashed out. But he made up for it in race two by finishing 11th overall and second in the EVO class, to make it a Team Bimota Alstare 1-2. As the BB3 is currently awaiting homologation, both Ayrton and Christian’s results are excluded from the points, but today’s superb performances show that the BB3 is realising its potential sooner than later.

Ayrton Badovini (Race 1: 10th overall, 1st EVO class - Race 2: 9th overall, 1st EVO class): “I am really happy with today – especially after yesterday’s crash. It’s always difficult after a crash and I didn’t have a good feeling with the bike in this morning’s warm-up – maybe because it was pretty wet and very slippery. So when the track dried and the sun started to come out and the prospects for two dry races looked good, I immediately felt a lot better about the situation.

I knew that my BB3 worked well in the dry here and when I got off to good starts in both 23-lap races, I felt that this could be a good day. I felt comfortable on the bike and riding was easy – and for that I would like to say a big ‘thank you’ to the team for all the work they put in. I had no particular problems in either race, though we need to improve the feel of the front end a bit more. I would like to dedicate my two EVO wins today to Francis Batta and the team – both are very special to me.”

Christian Iddon (Race 1: DNF - Race 2: 11th overall, 2nd EVO class): “I crashed after four laps in race one and it was my fault, because I was a bit too hasty. I had started well and got ahead of some of the good guys, but then lost some places in the chicane and hairpin. I tried to get back all the positions I had lost in one corner and that was my undoing because I was a bit too aggressive and lost the front. There was plenty of time left in the race, so I should have waited to make my move.

Because of that, I was probably a bit too cautious at the start of race two on the first lap. I wanted to get settled before I started to push hard. My seat came loose after a couple of laps, but it was not a huge problem and after a while I got used to the feeling. A lap or so later, I had a feeling that the engine wasn’t running right and I rode steadily, but a bit nervously, in case something happened. But the bike seemed to be working OK, so I just carried on.

For us to finish first and second in the EVO class today is pretty amazing, especially when you consider that we beat a lot of really good guys on the way.”

Francis Batta - Team Manager: “When you have a good day like today, it’s not necessary to say much. I am very happy with our two victories in the EVO class and our 1-2 in race two made it a bit special. It’s reward for all the hard work the whole team has put in since this project started – and that was not that long ago at all! We always felt that the BB3 had potential and tody has proved it.”

Sykes heads another Kawasaki 1-2 in race two at Donington

A new destination, Malaysia, for the Ducati Superbike Team this weekend