Repeat performance for Sykes in second encounter at Misano 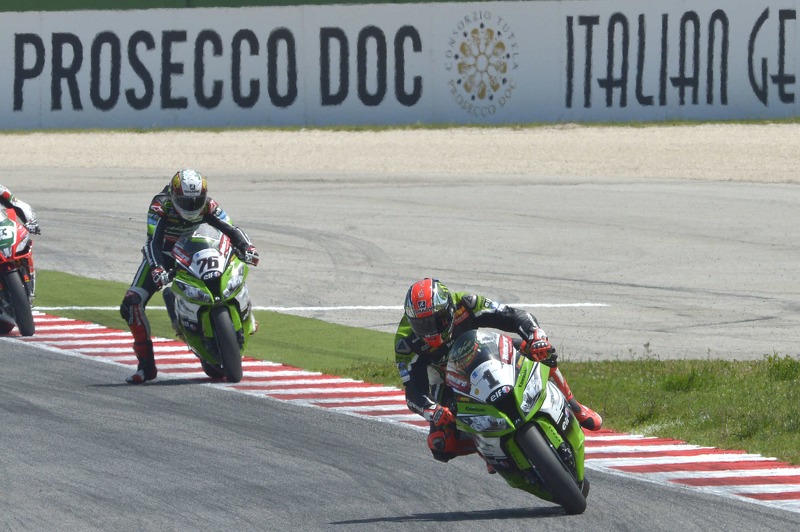 It was the 20th career individual race win and the third double in the season for Tom Sykes.

Misano (Italy) – Following a difficult weekend in Sepang, the Kawasaki Racing Team was back on top form at Misano – in front of the 59,424 spectators attending over the three days – with reigning Champion Tom Sykes taking the double, Loris Baz finishing with a brace of second places and David Salom leading the EVO field in both races. Thanks to his third double of the season, Sykes has now a 39-point advantage over Sylvain Guintoli (Aprilia Racing Team) and 41 over teammate Baz.

Despite still being second in the standings, Guintoli was on the back foot today at the Misano World Circuit, missing out the podium and being edged again by his fellow works Aprilia rider Marco Melandri, who completed the podium in the two WSBK encounters of the seventh round.

The eni FIM Superbike World Championship will be back in action in a fortnight’s time, as the series heads to the Portimão’s Autodromo Internacional do Algarve, for the first of two back-to-back rounds before the summer break.

Tom Sykes: “I am very pleasantly surprised at these results but I knew that the adrenaline and the concentration would give me something extra. It all went to plan in race one. I knew I had some limitation all weekend and I said that to my crew chief, and what the issues were. After that you need to get on and do the job. The lap times were quite surprising at the start and my pace too. The front and rear were moving a lot but the feedback from the bike was fantastic, so I have to thank Marcel and Danilo and all the mechanics for that. In race two it was even more difficult, I had to stay focused but at the end the control of the second race was probably a bit more relaxed than in race one.”

Sylvain Guintoli: “Title race wise at least I am holding onto second place but I definitely was expecting more. The top speed was there but we need to find consistency in our race pace especially in the second half. In Race 1 we made the wrong tyre choice, whereas in the second outing we made some adjustments to close the gap to the leaders. While I was with Marco and Baz I made a few mistakes which kept me from battling for the podium in the end. It's a shame there is no Race 3. Anyway, we need to keep working to be more consistent in the race”.


After 21 fast and furious laps, Tom Sykes (Kawasaki Racing Team) has won the opening race of the day at the Misano World Circuit – Marco Simoncelli after starting from Pole Position courtesy of his record breaking lap yesterday.

From the start however it was Toni Elias (Red Devils Roma Aprilia) that took the holeshot before reigning champion Tom Sykes forced his way past towards the end of the opening lap.

Both factory Aprilia riders made small mistakes before regrouping allowing Loris Baz through to give chase to his Kawasaki team mate.

Elias overshot at the start of lap 3 into turn one whilst the battle at the front was intensifying.

As the race progressed the battle at the front was fast becoming a two rider affair with the fight for the final podium place now involving both Ducati riders as well as the two factory Aprilia machines, Elias and the Pata Honda of Jonathan Rea.

As the race entered the final third Sykes was pulling away from Baz by 2 tenths of second leaving the Frenchman a lonely second. The final podium fight was now between Marco Melandri (Aprilia Racing Team) and Chaz Davies (Ducati Superbike Team) with Melandri eventually grabbing 3rd at the flag.

David Salom (Kawasaki Racing Team) came out on top in the EVO battle after working his way through the pack after being caught mid pack in the opening sequence of corners eventually finishing a respectable 11th overall.

After winning the opening race of the day reigning champion Tom Sykes was victorious again in race two putting in a commanding performance aboard his Kawasaki Racing Team machine.

Race 2 was over before it had begun for Davide Giugliano (Ducati Superbike Team). The Italian who had finished 8th earlier in the day took the lead into turn one but was judged to have moved before the lights went out and was given a jump start penalty. He would eventually finish 9th after serving a ride through the pits for his mistake. Ducati’s other rider Chaz Davies crashed out of fifth on the 5th lap.

In the EVO battle the accolade of being the best classified finisher went once again to David Salom (Kawasaki Racing Team) despite a valiant race from Sylvain Barrier (BMW Motorrad Italia) on his return to racing.

Christian Iddon (Team Bimota Alstare) highsided out of contention early on but was thankfully able to limp away. Fellow Brit Leon Haslam (Pata Honda World Superbike Team) crashed out of the fight for fifth. Unlike Iddon, Haslam did remount to finish 12th.