Scott Redding says his podium in last weekend's final World Superbike race of the weekend at Magny-Cours was "like a win" after a disastrous run to 12th in the opening race at the French venue.

Ducati rider Redding suffered his hardest weekend in the series for several rounds as he could only manage eighth in qualifying, setting himself up for a tough opening race on Saturday.

A poor opening couple of laps for the Briton and a late crash consigned him to 12th, his worst finish since July's Donington Park round, but his fortunes improved on Sunday as he took fifth in the Superpole race and followed that up with a third-place finish in the final race.

However, there was still nothing Redding could do to match chief rivals Toprak Razgatlioglu and Jonathan Rea, who locked out the top two positions between them in every race at Magny-Cours, putting more distance between themselves and Redding in the championship.

Reflecting on a turbulent weekend, Redding said that his Ducati Panigale V4 R was performing much better in the heavy braking zones on Sunday, but that acceleration out of slow corners remains problematic.

Redding recalled: "It was a bit hotter [on Sunday than on Saturday], but I said to the guys, 'If I can start on the first two rows'… that’s why I was fighting like an animal [in the Superpole race] to try and be there.

"[I told the crew] 'I need a bike that stops a little bit better, and I think I can go on the podium, that’s my goal.' So they changed something and it was stopping [better]. Maybe I was a little bit deep [at the Adelaide hairpin] once or twice, [in Race 1] it was 15 times.

"That gave me confidence to push a bit more, I thought we might be able to have a battle to the end, but after a couple of laps coming out of [Adelaide] I could just feel them going away, I was losing two tenths. I was doing that recovery all the time, I wasn't maintaining [the gap].

"I was having to muscle the bike, and after 12 laps that started to take a toll on me. The tyres were dropping and I was sliding, and I was having to force it even more. I was fatiguing and the workload was getting harder. 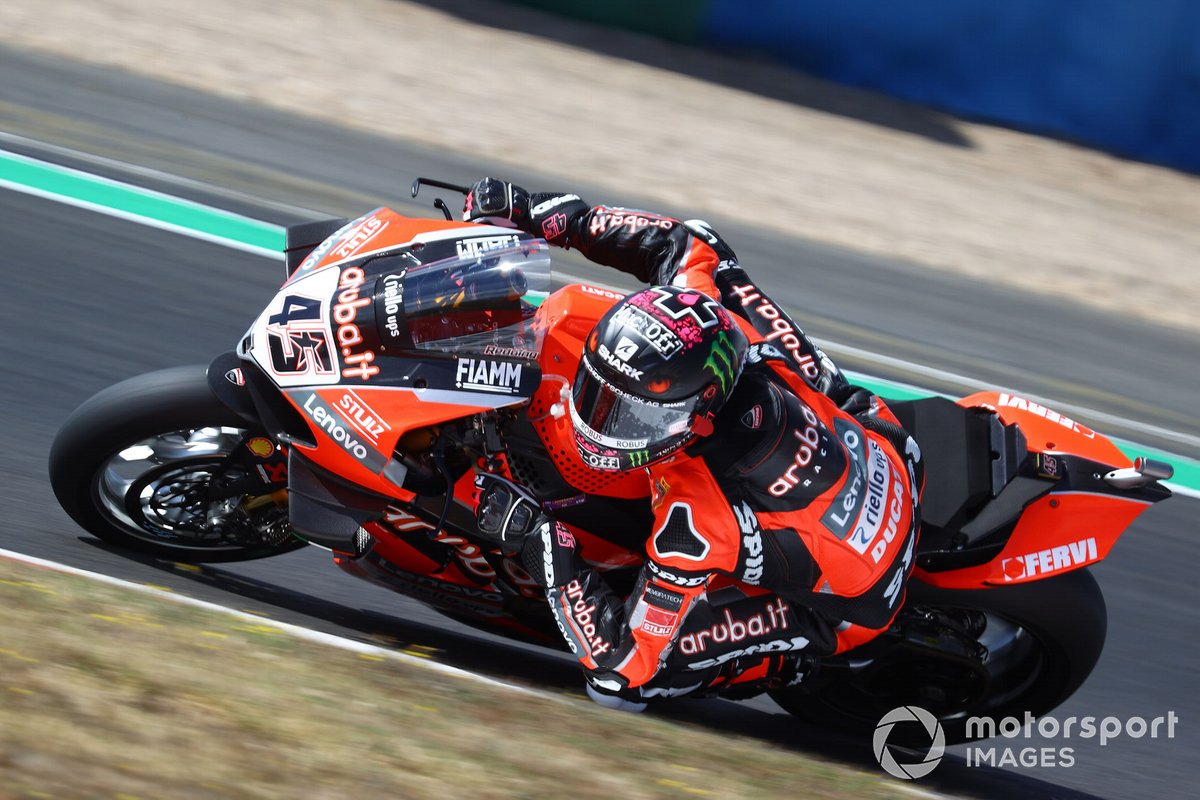 "Third was my goal. I thought if I could get on the podium it would be like a win given how bad [Race 1] was. And I executed it perfectly.

"If we had a bit more out of the slow corners, I could have battled Jonathan at the end. They weren’t a lot faster than me, I just couldn’t get out of the corners, it was just acceleration. Sometimes this is a strong point of the other manufacturers, like at Donington Park, I just did what I could and I’m happy."

Redding is now 72 points down on Razgatlioglu in the championship with five rounds to go, and is expecting next weekend's Barcelona round to be a similarly tough event for Ducati.

"It is what it is," said the Briton when asked about the state of play in the riders' standings. "I’ve had a good past three rounds, this one was a bit harder but we managed at the end to be there.

"I just gave up a handful of points in Race 1. But this can happen. We know this bike in certain conditions just doesn’t work for me. And I just tried to make something out of nothing and I crashed. It was one of those situations.

"I suspect it’s gonna be the same situation [for Ducati at Barcelona] as this weekend. I need to be on the podium, it won’t be easy but that’s my goal, and when we get out of there we need to see what I can do.

"You never know what can happen, [Razgatlioglu and Rea] could crash into each other twice, I could win two races and I’m back again! But as I said before, I’m not really fixated for the championship, I’m just taking it by race-by-race, do my best and that’s all I can do for the moment."