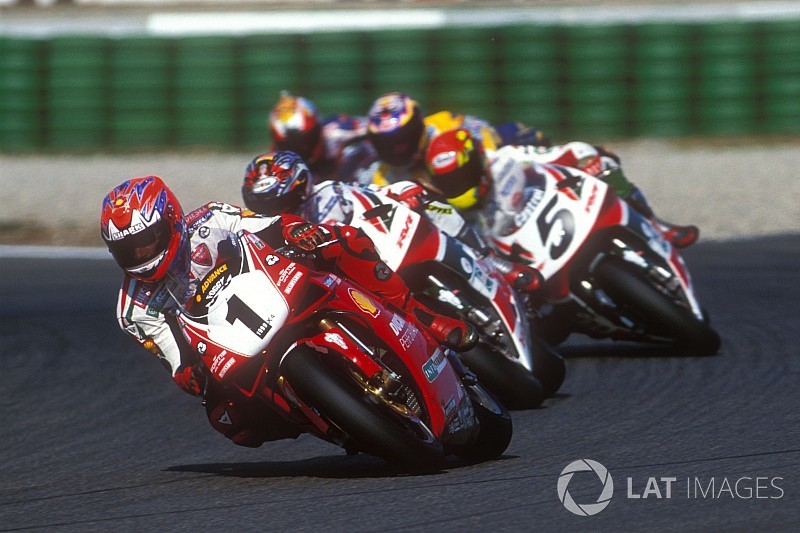 Triple World Superbike champion Jonathan Rea says it would be “incredible” to compete with series legend Carl Fogarty's records, but is adamant it is not his main motivation.

Rea can match four-time champion Fogarty's record tally of 59 WSBK wins this weekend at Imola, after claiming his 57th career victory in the opening race of the Assen round last month.

The Kawasaki rider says he has never concerned himself with statistics, though admits passing the all-time win tally has always been a “personal target”.

Despite this, Rea says his main motivation remains race wins and championships, though hopes people will look back over the 'Rea era' and consider him one of the greats of WSBK.

“Just to be compared with him [Fogarty] is already cool,” Rea, who leads the standings by 30 points ahead of Imola, said.

“It's something I've never looked at stat-wise, but last year many people were talking, after the three championships in a row, about equalling Foggy's record and for me a personal target was try and surpass his race win tally.

“I'm getting closer to that, so that's something I can be really proud of.”

He added: “I'm just motivated by championships and race wins. Statistics are nice.

“I hope that in the future for many years people can look back and consider me as one of the greats of Superbikes as maybe now we're going through my era, like the Foggy era or the Bayliss era.

“So the people can look back like that, but stats are stats, there's always someone going to come and smash them.”

While honoured to be compared with Fogarty, Rea admits surpassing fellow triple world champion Troy Bayliss' tally of 52 wins and equalling his feat of three titles is “something really great.”

He added: “To be honest, when I surpassed Bayliss at Magny-Cours - win tally and equalled him with three championships - and I mean Troy, he was... like I said, it was the Bayliss era.

“And now to be considered like that is completely awesome. I mean Foggy for me was a legend because he was British, but it was a little bit before my time before I understood what was what.

“But I remember watching Bayliss quite a lot and understanding his level, his aura, and he brought a lot to Superbikes.

“When someone pointed that out, I thought 'wow, I've done something really great'. To go on to compete with Foggy's records would be incredible.”