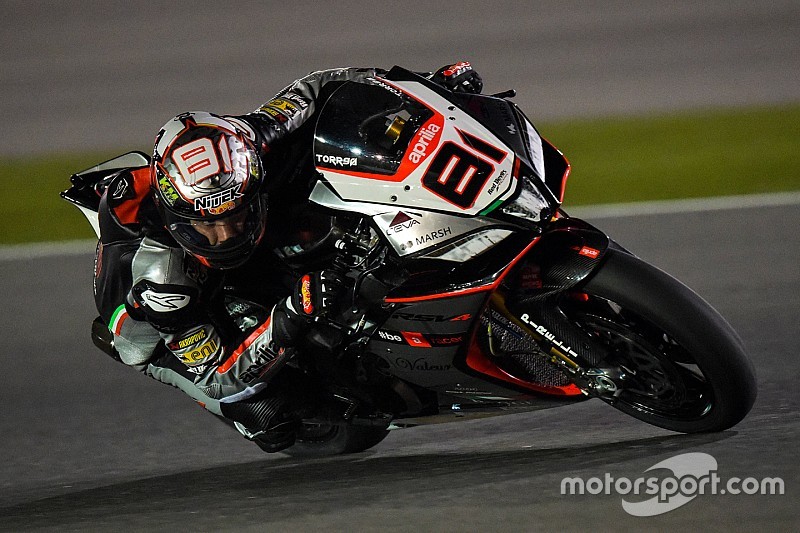 Jordi Torres came out on top of a thrilling final lap showdown with Jonathan Rea to clinch a maiden World Superbike win under the floodlights at Qatar.

Torres hit the front of the field for the first time at Turn 1 with five laps to go, working his way up from his grid slot of sixth.

The Spaniard broke clear of an early three-way dice with Aprilia teammate Leon Haslam and Ducati rider Chaz Davies to move up into third before setting after Kawasaki duo Rea and Tom Sykes.

Poleman Sykes led the opening laps, but was never able to shake off Rea, and the 2015 champion muscled his way by for the lead with eight laps remaining.

Sykes then fell prey to Torres at the first corner with six laps to go, before the Spaniard repeated the move on Rea on the following lap.

But Rea was unwilling to concede defeat quite so easily, sticking to the rear wheel of the Aprilia and making two attempts to pass on the final lap - including round the outside at the very last turn.

Neither came to fruition however, Rea running wide at the last corner and trailing first-time WSBK winner Torres, who becomes the first non-Briton to win a race this season, by 0.7s at the chequered flag.

Sykes took the final spot on the podium in third, while Davies held off the Honda of Michael van der Mark in a close battle for fourth.

Randy de Puniet had run inside the top 10 for much of the race in his best showing for some time, but was muscled back to 12th by the finish, while Suzuki teammate Alex Lowes was forced to retire early on having run as high as third.