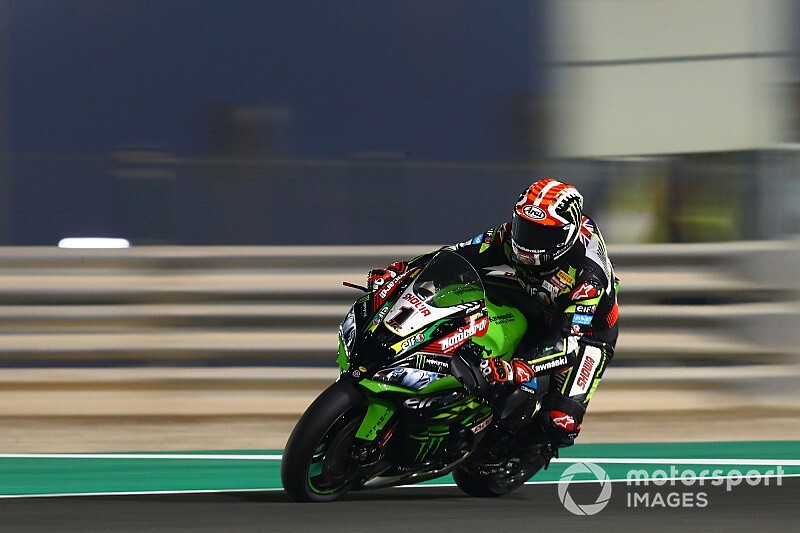 Kawasaki’s Jonathan Rea capped off his fifth title-winning World Superbike campaign with victory in the final race of the year in Qatar.

Rea battled with the Ducati duo of Alvaro Bautista and Chaz Davies in the first half of the 17-lap second feature race, before making a crucial break with six laps to go to secure his 17th win of the year.

The Kawasaki rider once again grabbed the initial holeshot from pole position, but was challenged by the fast-starting Bautista on the run into Turn 1, reclaiming the lead when the Ducati ran wide.

Bautista used the brutal power of the Panigale V4 R to ease past Rea on the main straight as they started the second lap, though would then be re-passed at the Turn 7 right-hander.

The Ducati rider made mistakes at Turns 8 and 9 trying to keep Rea at arm’s length, and allowed him to build a small margin in front.

Behind, Davies cut his way through on the Yamaha duo of Alex Lowes and Michael van der Mark, and the Puccetti Kawasaki of Toprak Razgatlioglu at the start of the fourth lap and set about chasing the leaders.

He started the fifth tour a second adrift of Rea and Bautista, who had closed up once more, and that gap was reduced as the top two engaged.

Bautista shot past Rea on the run to Turn 1 on the ninth lap, though the Kawasaki seized the position back with a daring move at the Turn 6 hairpin.

Davies watched on as this unfolded, and struggled to find a way past his team-mate as Rea immediately started to break away.

Building up a lead of eight tenths, Rea was 1.9s ahead with four laps to go and came under no threat to end the season with the triple in Qatar.

Davies found a way past on Bautista at the penultimate corner with four laps remaining, and fended him off by a tenth of a second on the run to the chequered flag to secure second.

Bautista’s final race on the Ducati ends with the 25th podium of his rookie year, while Alex Lowes tied up third in the standings in fourth place on his last outing as a Yamaha rider.

Razgatlioglu snatched fifth in the end, with Eugene Laverty making his way up to sixth on the Go Eleven Ducati ahead of van der Mark, Ten Kate’s Loris Baz and Leon Haslam – who faded dramatically in the latter stages on the sister KRT machine.

Sandro Cortese completed the top 10 on the GRT Yamaha, while his teammate Marco Melandri signed off his racing career out of the points in 17th after making a late mistake.

Wildcard Dominic Schmitter was a retirement on the YART Yamaha, while Althea Honda’s Alessandro Delbianco also failed to reach the chequered flag.