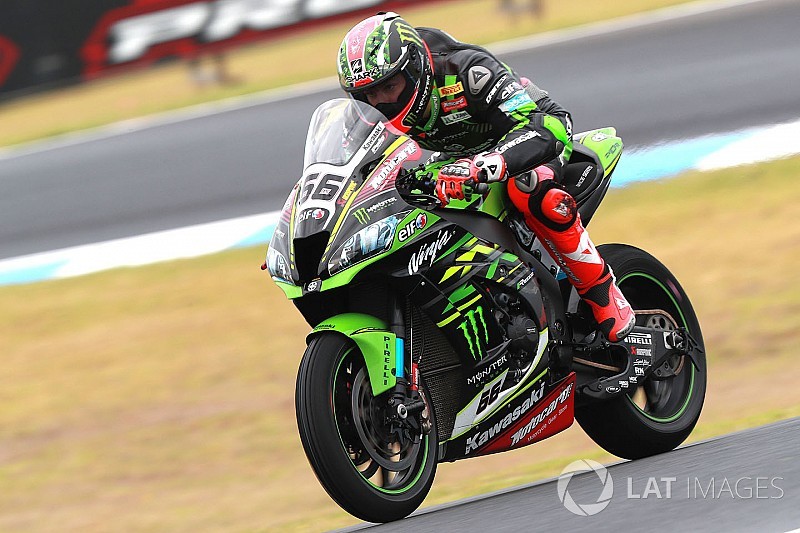 The session was brought to a brief halt after Friday pacesetter Lorenzo Savadori was launched from his Aprilia exiting Siberia just moments into SP2.

Once back underway, it was Savadori's Aprilia teammate Eugene Laverty who set the pace on the initial flying laps on race tyres with a 1m30.339s, the Northern Irishman almost seven tenths clear of the rest.

By the time of the qualifying tyre runs, the wind had picked up significantly around the 4.4km Phillip Island track, and this had a big effect on laptimes.

Sykes set the timing screens ablaze on his final flying lap, and shot to the top of the pile with a 1m30.099s with just a few seconds left on the clock.

With those behind struggling to find significant gain on the qualifying tyre, the Yorkshireman remained unchallenged to claim his first pole since the German round last September.

Laverty's earlier effort kept him second for the season-opener this afternoon, with Marco Melandri dragging his Ducati to third.

Alex Lowes brushed off a small fall at Turn 4 earlier in the session to qualify fourth, while Chaz Davies on the second factory Panigale leaped ahead of reigning champion Jonathan Rea, who struggled in the windy conditions.

Savadori was due to start 10th but has been declared unfit to race after making a trip to the medical centre for his early crash in SP2.

His non-start promotes Honda's Leon Camier and SP1 pacesetter Jordi Torres to 10th and 11th on the grid respectively, despite the duo falling on their first laps following the red flag.

Jake Gagne missed out on a place in SP2 by just a couple of tenths, the Honda rider demoting WSBK returnee Loris Baz (Althea BMW) to 13th in the closing stages of the first qualifying session.

Roman Ramos put his Go Eleven Kawasaki 14th on the grid for the opening round of the season, while Australian wildcard Wayne Maxwell heads Leandro Mercado (Orelac Kawasaki) and rookie Yonny Hernandez (Pedercini) will start 17th.

Triple M's PJ Jacobsen suffered big crash during fourth practice, and struggled in SP1 on his repaired Honda. The American will line up last for his debut later today.