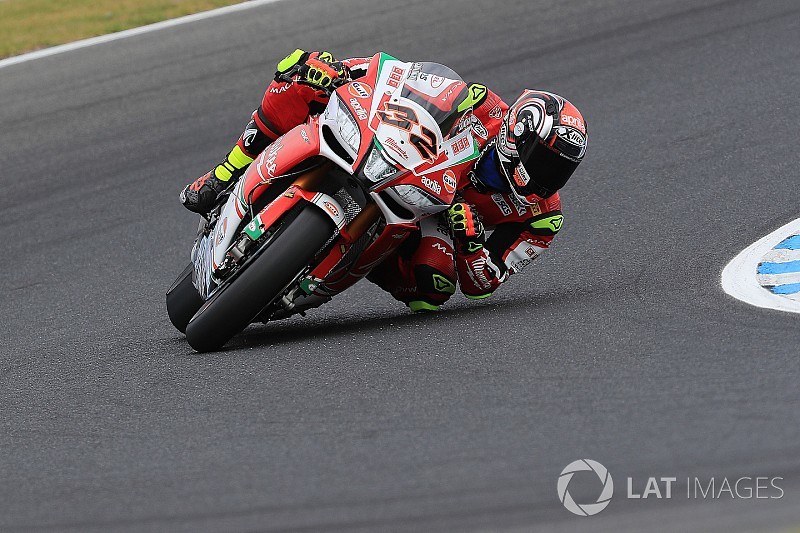 Aprilia's Lorenzo Savadori set the pace on the opening day of the 2018 World Superbike season at Phillip Island ahead of Honda's new recruit Leon Camier.

For the first time in WSBK, Friday's practice was split into three sessions, with the final results at the end of the last one deciding the runners for the two Superpole sessions on Saturday.

The first 40-minute session was affected by early morning rain, with Marco Melandri setting the pace with a 1m42.974s on his Ducati from reigning world champion Jonathan Rea (Kawasaki) and Eugene Laverty on the second Aprilia.

The track had dried for the start of second practice, with the early part of it action-packed as everyone sought to secure a place in SP2 in case a return of the rain in the final outing of the day.

Rea set the benchmark with a 1m31.921s, but top spot changed hands between the Aprilia pair and the sister KRT machine of Tom Sykes, whose 1m31.277s stood as the best time for much of the session.

Camier deposed the Yorkshireman with 10 minutes remaining, but found himself shuffled back to second after a late charge of 1m30.407s from Savadori put him top of the pile.

This stood as a the best time of the day, with only a handful of improvements being made inside the top 10 in FP3. Camier and Laverty completed the top three by virtue of their second practice efforts.

Sykes was fourth ahead of teammate Rea, who improved to a 1m30.972s in the final session ahead of FP1 pacesetter Melandri and Yamaha's Michael van der Mark.

Xavi Fores was top independent runner on the Barni Ducati in eighth, the Spaniard edging ahead of Chaz Davies on the factory Panigale with a 1m31.225 set in FP3.

Alex Lowes completed the list of direct entrants into SP2 in 10th after improving to a 1m31.516s in the final session following a crash early in FP2 at Siberia.

A crash in the third session denied Jake Gagne the chance to make it two Red Bull Hondas in SP2 in 11th, with Toprak Razgatlioglu couple of tenths further adrift in 12th on his Puccetti Kawasaki ahead of MV Agusta debutant Jordi Torres.

MotoGP convert Loris Baz (Althea BMW) only managed a handful of laps in the final outing of the day after a heavy fall towards the end of the second session at Turn 4, and was left in 16th on the combined timesheets on his return to WSBK.