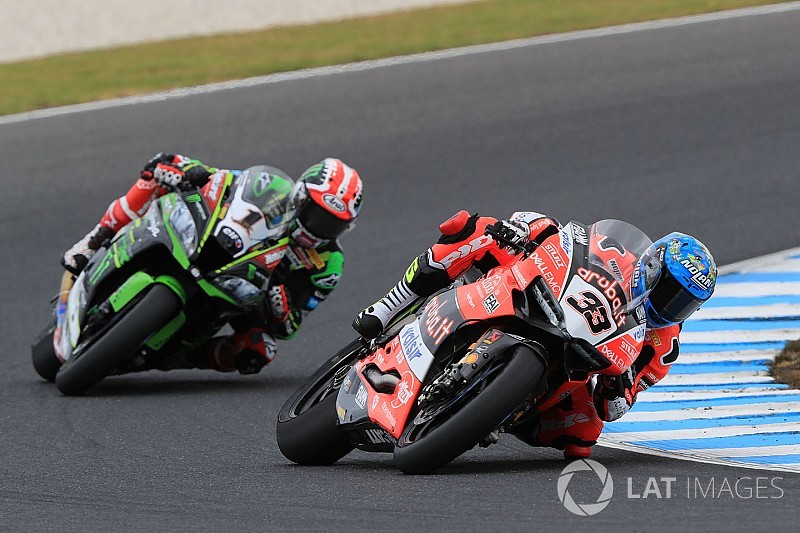 Marco Melandri doubled up in the second World Superbike race at Phillip Island after he beat Jonathan Rea by 0.021s as Eugene Laverty and Chaz Davies both crashed from the lead.

The race featured a mandatory pitstop, which had to be served at the end of Lap 10, 11 or 12, due to several riders having issues with the rear Pirelli tyres during Saturday's season opener.

While Rea had a good start to lead off the line from second on the grid, Laverty passed both him and pole-sitter Xavi Fores to take first at Turn 4.

The Irishman quickly built a safe gap, but his lead was shortlived as he crashed at Siberia on Lap 3.

A group of riders including Fores, Rea and Davies subsequently started to fight for the lead until the start of the pit window.

Fores and Rea changed tyres at the first possible moment with Davies waiting for an extra lap and rejoining in first place following his stop.

The Spaniard was closely followed by Kawasaki duo Rea and Tom Sykes as well as Melandri, but managed to hold on to the lead for eight laps.

He was eventually overtaken by Rea and Melandri at Turn 1 and 4 respectively with two laps to go.

Melandri also slipstreamed past Rea on the main straight at the start of the final lap, only for Rea to come back at Turn 1.

The reigning champion then held on to first place for the remaining corners of the race and looked set to win, only to be beaten by Melandri at the exit of the final turn and lose out by 0.021s.

Fores completed the podium, his second in World Superbike, with Sykes finishing fourth.

Yamaha's Alex Lowes was fifth ahead of Leon Camier (Honda) and his teammate Michael van der Mark, who was only 3.098s behind the winner.

Honda rookie Jake Gagne had a crash early on but the American managed to rejoin the race and finish 13th.

Rea reveals he had surgery before Phillip Island opener