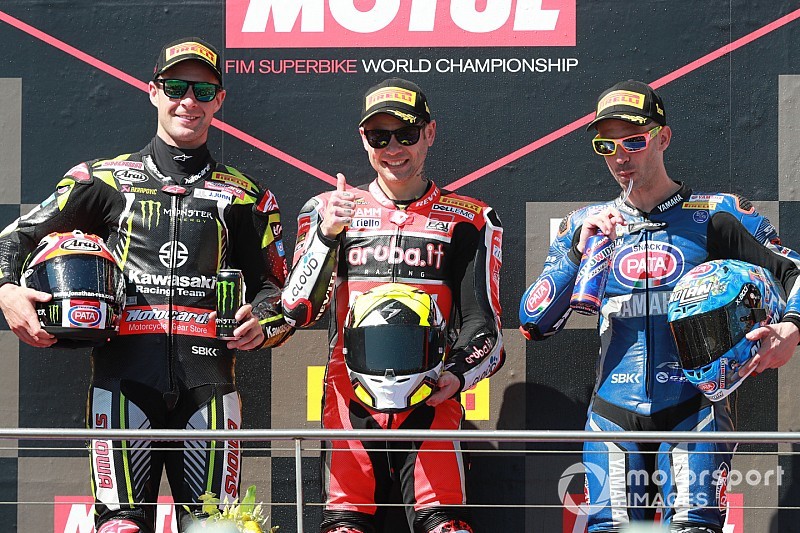 Ducati works rider Alvaro Bautista blitzed the World Superbike field in the opening race of the 2019 season at Phillip Island.

Bautista, making his debut in the series after nine years in MotoGP, gave the new Panigale V4 R bike victory by 14.983s after taking the lead on the opening lap.

Despite having swept the pre-season test at the Australian venue and setting the pace in practice, Bautista was beaten by the two factory Kawasakis in qualifying.

But the former MotoGP rider picked off Leon Haslam at the start, and swiftly pounced on pole-sitter Jonathan Rea to take the lead at Stoner Corner.

Rea initially kept up with the Ducati, but was overtaken by Haslam on the following lap – and though he reclaimed the spot a few corners later, Bautista had already cleared off.

The Spaniard was three seconds up the road by the time Haslam passed Rea again on the fourth lap at the Turn 4 right-hander, and when Rea retook second again some seven laps later at the first corner, he was now almost eight seconds down on Bautista.

As the race passed its halfway point, Kawasaki newcomer Haslam swept past his champion teammate once more, this time at Stoner Corner, only to crash at Turn 4 a lap later.

This finally left Rea in clean air, but the four-time champion was forced to focus on defending from Yamaha's Alex Lowes rather than make inroads into Bautista's unassailable lead.

Rea was ultimately successful at fending off Lowes, who lost third to a charging Marco Melandri on the GRT Yamaha on the final lap, as the other works Yamaha of Michael van der Mark completed the top five.

Puccetti Kawasaki rider Toprak Razgatlioglu was sublime in the opening stages, rising to as high as fourth place from 14th on the grid after three laps.

He faded somewhat in the second half of the race, but still finished sixth in the end, beating BMW rider Tom Sykes.

Bautista's teammate Chaz Davies, who had been Ducati's benchmark in the last few years, recovered six places after a torrid qualifying to finish 10th.

Haslam had remounted after his crash, and passed Honda works rider Ryuichi Kiyonari to claim the final point in 15th.

Kiyonari's Honda squadmate Leon Camier crashed out while running in the top 10 early in the race.