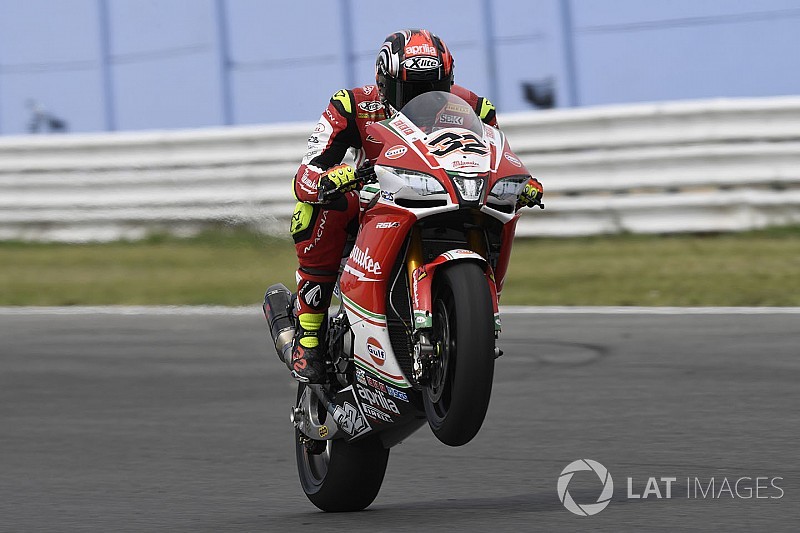 Championship leader Jonathan Rea comes into this ninth round of the 2018 season 75 points clear after a double victory last time out at Laguna Seca, and led the way in a dry opening session of the day at Misano.

The Kawasaki rider's stablemate Tom Sykes was the initial pacesetter in FP1 with a 1m35.632s, though Rea usurped him soon after with a 1m35.364s.

Rea duly improved to a 1m34.128s in the closing stages, while Yamaha's Alex Lowes shadowed him by just over a tenth.

Marco Melandri completed the top three on the first of the Ducatis, with Sykes slotting in behind fourth-placed Leon Camier on the Honda.

The weather remained pleasant for the second 40-minute session of the day, with Rea improving on his FP1 best straight away with a 1m35.003s, while Lowes trailed him by 0.045 seconds.

Rea's effort kept him top of the pile for most of the session, before a late flurry of laps saw the Aprilia duo leap up to the front.

Rea found himself shuffled back to third, with Althea BMW's Loris Baz 0.022s further adrift in fourth ahead of Lowes.

Rain during the preceding World Supersport second session left the circuit saturated for WSBK's final outing of the day, with only MV Agusta's Jordi Torres and Orelac's Lenadro Mercado venturing out for a lap. This meant the direct entrants into SP2 were decided on FP2 times.

Camier's sixth in FP2 secured him safe passage on his Honda, while Melandri leads a trio of Panigales into SP2, with Barni Racing's Xavi Fores and factory stablemate Chaz Davies eighth and ninth on combined times.

Sykes clung onto the last SP2 place in 10th despite late pressure from Michael Ruben Rinaldi, with the Italian pushing Michael van der Mark back to 12th.

Van der Mark's – who will face SP1 for the second-successive round – fellow factory Yamaha man Nicolo Canepa, making his second wildcard appearance of the year, will join him after ending the day 15th.

Injury for Guandalini replacement Karel Hanika following his debut WSBK outing in America has seen Alessandro Andreozzi drafted in for this weekend. The Italian was 18th on Friday.