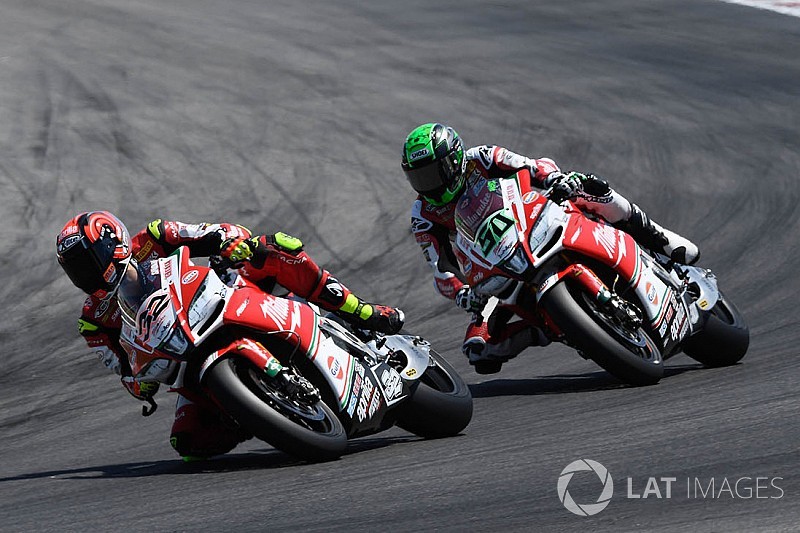 Milwaukee World Superbike boss Shaun Muir says he would like his squad "to be considered" for factory tie-ups with BMW and Suzuki in 2019.

Aprilia withdrew its factory involvement from WSBK at the end 2015 to focus on its fledgling MotoGP works effort, but put more involvement back into WSBK with Muir's team last season.

Muir confirmed to Motorsport.com that “constructive” talks with Aprilia have taken place about extending their partnership, and hasn't ruled out running RSV4s in '19.

But, should Aprilia withdraw again, Muir will look at running Ducati machinery, and also suggested a partnership with BMW or Suzuki could be possible if either marque can offer full factory support.

“We had a constructive meeting with Aprilia," Muir said. "In the next 10 days it will become very clear which direction we go.

“Not really before BMW decides to have a full factory deal [will we consider them]. But we would like to be considered for this if it happens.

"The same with Suzuki. We would like to be considered for this if they have a factory deal.

“If nothing like this happens, we would explore leasing Ducatis. First things first is to get everything on the table and then we can make a sensible decision, a rational decision.”

Pressed on whether a decision on the futures of Eugene Laverty and Lorenzo Savadori had been made, Muir replied: “Nothing clear. For sure I want to talk now with my two riders.

"For sure before I talk to the riders I need to have a bike to sell the riders. Also I need to understand which riders are available.”

Laverty says his back-to-back podium finishes in America and at Misano this season was an “SMR effort”, as Aprilia's support for the team has been lacking since the middle of last year.

Struggling to stop the bike for much of this season, Laverty says a “true factory team” would have fixed this issue sooner, and believes Aprilia's lack of support has “made the bike dangerous.”

“The first half of last year, because let's say up to Laguna Seca last year there was a lot of factory support," said the Irishman, who returned to WSBK last year after a spell in MotoGP.

“I think mid-season, whenever I went second position or fourth position on the Friday afternoon at Laguna Seca, I said 'yeah, we have a bike that can be on the podium here'.

“Unfortunately it took us one year to get that. The bike hasn't changed that much to get that, we haven't received many updates from Aprilia.

He added: “There's one limitation that we've really had for this last year, and now in Portugal I think we're finally going to get something to make the bike stop better.

“But that's taken too long. If you're really a true factory team, we should have had that in the winter because that's always been a problem and it's made this bike dangerous.”

Sykes and Kawasaki to part ways at the end of 2018