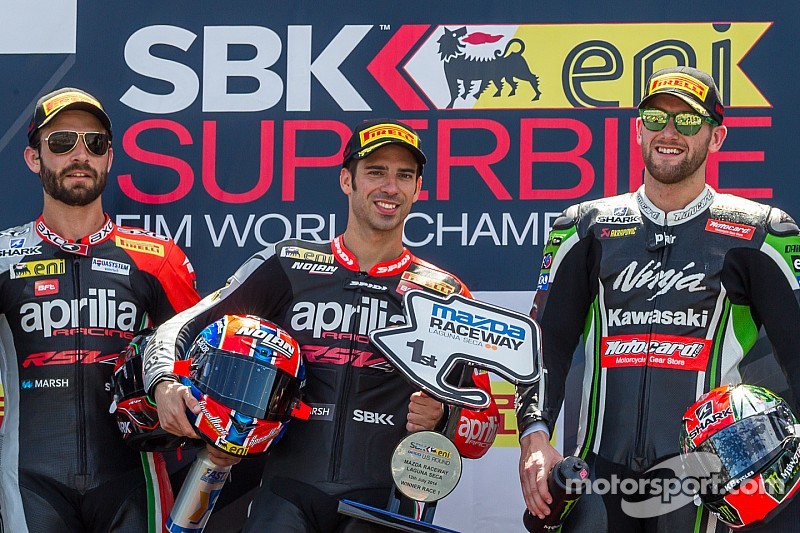 After 25 thrilling laps, Marco Melandri (Aprilia Racing Team) has won the opening race of the day at Laguna Seca.

Starting from Pole Position it was Tom Sykes (Kawasaki Racing Team) who initially took the holeshot into turn one ahead of the works Aprilia duo of Marco Melandri and Sylvain Guintoli who both passed the reigning champion at the end of lap one after Sykes made a mistake at the Corkscrew.

Chaz Davies (Ducati Superbike Team) crashed spectacularly from 4th on lap two as the leading three began to edge away from the fast starting Leon Haslam (Pata Honda World Superbike Team) who was promoted to fourth after the Ducati rider’s departure.

By quarter race distance the circuit lap record set in 2013 had been smashed and the top three riders had a comfortable gap over the chasing pack.

As the race entered the final third, the tense battle at the front intensified as Guintoli applied the pressure to his Italian team mate with Sykes watching the action unfold in front of him before the Italian broke away.

At the flag it was a rather spread out affair with Melandri taking the win, his 3rd of the season ahead of Guintoli and Sykes who claimed the final podium place.

In the battle of the EVO riders it was David Salom (Kawasaki Racing Team) that took the honours coming home in a solid 10th with Niccolò Canepa (Althea Racing Ducati) 11th and Sylvain Barrier (BMW Motorrad Italia) 12th.

Leon Camier (MV Agusta Reparto Corse) was classified 15th and took the final championship point on his debut for the Italian team.

USA bound for WSBK as ninth round draws near