Melandri does the double in Malaysia

It was the second double of Melandri’s career after the one he scored in Brno two years ago.

Sepang (Malaysia), Sunday 8 June 2014 – Marco Melandri (Aprilia Racing Team) came out victorious in the second World Superbike race of the day at the Sepang International Circuit, making it two out of two in front of an enthusiastic Malaysian crowd that reached a total of 34,528 spectators over the three days. The Italian got the better of teammate Guintoli in the final lap of the race, with the two swapping positions three times before crossing the line. It was the second double of Melandri’s career after the one he scored in Brno two years ago, aboard the factory BMW.machinery he was riding at the time.

Marco Melandri: “We really needed this double! We never gave up despite the difficulties we went through, we kept working hard and fighting. I found a good feeling here astride my RSV4. Conditions were difficult in race one, but I managed to close the gap to Sylvain anyway. After overtaking him I was able to pull away just enough to win. 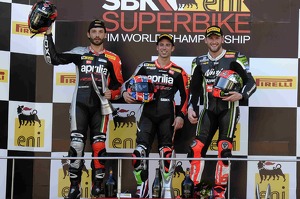 Race 2 podium: Sylvian Guintoli, Marco Melandri, and Tom Sykes
Race two was even harder, as I had to make my through the Kawasakis before try and catch my teammate. During the last lap I tried everything I could up to the finish line. A lot of respect should be paid to all riders for today’s races, because it was really tough to ride in these conditions. I would like to dedicate this double to my girlfriend Manu who is due to give birth soon and to the team.”

Tom Sykes (Kawasaki Racing Team) made amends after being taken out in race one to take the final spot on the podium, despite a painful wrist. The Brit still leads the standings after the sixth round whilst Guintoli now lies second in the title race, only 13 points behind the reigning champion.

Tom Sykes: “We got a podium and we are still leading the championship, which is very important. We made a change to the machine after Superpole and in warm-up I was very happy. I had a bit of a limitation in race two which created a little bit of instability with the bike because I was not able to use my right hand to its full potential. It is was difficult to see the two guys up front go away because if I was riding fit then I think we could have tried to give them something to think about. My crew chief had a good chat with me before race two, and he said we needed to try and do the best we can.”

The race was initially red flagged after the MV Agusta of Claudio Corti expired resulting in a small fire that needed to be extinguished by the track side marshals.

With only 3 full laps completed the grid for the restart was determined by the positions at the end of the third revolution, meaning Sylvain Guintoli (Aprilia Racing Team) was on pole ahead of Toni Elias (Red Devils Roma Aprilia) and Marco Melandri (Aprilia Racing Team). The restart, over 10 laps of the Sepang International Circuit did not disappoint, with the leading five riders locked together until the two factory Aprilia riders eased clear.

Marco Melandri had to take avoiding action as he misjudged his braking point on the second lap, narrowly missing the back of his team mate Guintoli and Toni Elias. Thankfully everyone stayed aboard treating the fans to one of the closest race finishes of the year. Melandri and Guintoli exchanged places several times on the final lap with the Italian getting the better of his team mate once again to take a double win on the championship’s first visit to Sepang.

Leon Camier (BMW Motorrad Italia) was the best classified EVO rider, racing to 12th at the end of the race ahead of David Salom (Kawasaki Racing Team).

Alessandro Andreozzi (Pedercini Kawasaki), and his team mate Romain Lanusse both crashed out, thankfully without injury.