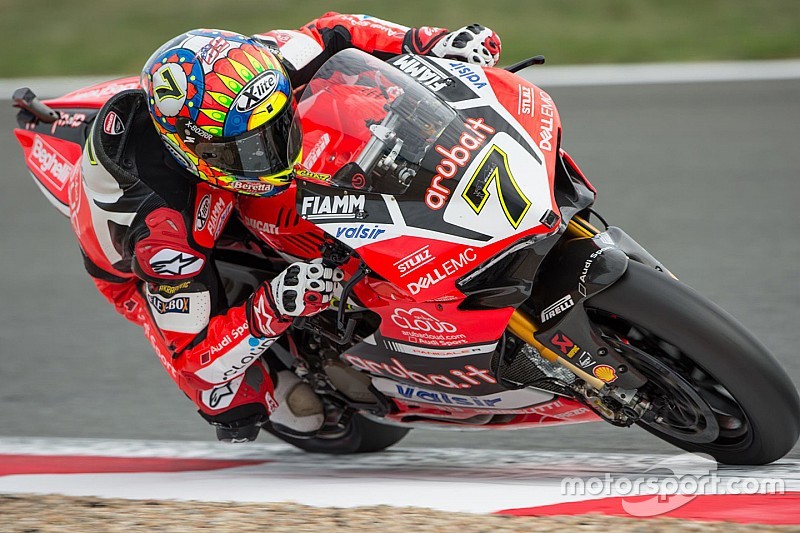 Chaz Davies was victorious in a damp Sunday World Superbike race at Magny-Cours, as newly-crowned champion Jonathan Rea was forced to retire in the early stages.

On a damp track, Yamaha duo Alex Lowes and Michael van der Mark made the best starts, and led the way along the straight approaching the Adelaide hairpin after leapfrogging poleman Leon Camier.

From sixth on the grid, van der Mark led at the hairpin but lost ground just as quickly, as he fell behind Lowes, Camier and the Ducati of Davies over the course of the next lap.

Lowes could only hold on to the lead for three laps before Davies took over, the Welshman then consistently pulling away.

Camier meanwhile seemed to be in a strong position to finally claim MV Agusta's first podium in the series, only for his bike to dramatically slow down.

However, his retirement did not guarantee Lowes second, as a recovering van der Mark immediately started to put pressure on his Yamaha teammate.

The Dutchman couldn't make a move, though, and Lowes eventually lost him and even closed the gap to Davies.

He cut the lead from five to three seconds before taking the chequered flag, as Davies collected his seventh win of the year.

Barni Ducati's Xavi Fores was a distant fourth, with Lorenzo Savadori looking set to take fifth before a mechanical issue on the final lap forced him out of the race.

Savadori's Milwaukee Aprilia teammate Eugene Laverty also failed to score, as he fell at the end of the second lap.

The Irishman's crash also affected Rea, who clipped Laverty's bike, and damaged his rear brake. That forced the Kawasaki rider, who sealed the title in Saturday's first race, to pull into the pits and retire.

The Ten Kate Hondas of Davide Giugliano and Jacob Gagne finished behind in 11th and 12th.