Magny-Cours WSBK: Davies passes Rea and Sykes to double up 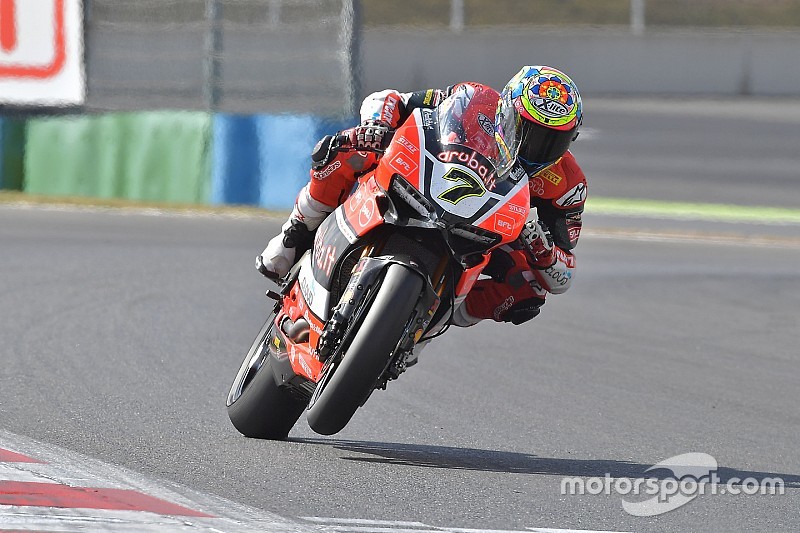 Spending the first half of the race in third, Davies took advantage of a deep overtaking attempt from Rea on Sykes to sneak past both of them.

Despite leading off the line, Rea was overtaken by both Sykes and Davies at the hairpin on the opening lap, the former leading the way.

The trio quickly pulled away from the rest of the field, with Sykes soon separating himself as the sole leader.

As Davies started to hold up Rea, the reigning champion made a move on the Ducati rider.

He then quickly closed the gap to leader Sykes, but as Rea did not risk an overtaking attempt, Davies managed to rejoin the leading group as well.

After running in an unchanged order for several laps, Rea finally went alongside Sykes at the hairpin but he went too deep, allowing Davies to pass both of them.

Sykes managed to stay ahead of Rea until a similar move a lap later turned out to be successful and the latter claimed second.

Having built a lead of a second by then, Davies managed to stretch his advantage even further throughout the remaining three laps to take his second win of the weekend.

Rea and Sykes completed the podium, the former extending his championship lead over the latter by four points to 48.

MV Agusta's Leon Camier finished fourth after passing the leading Honda of Michael van der Mark, who made it home in fifth.

Aprilia rider Lorenzo Savadori overtook Sylvain Guintoli's Yamaha in the early stages, but could not keep up with van der Mark and had to finish sixth.

The Hunt for Rea is on