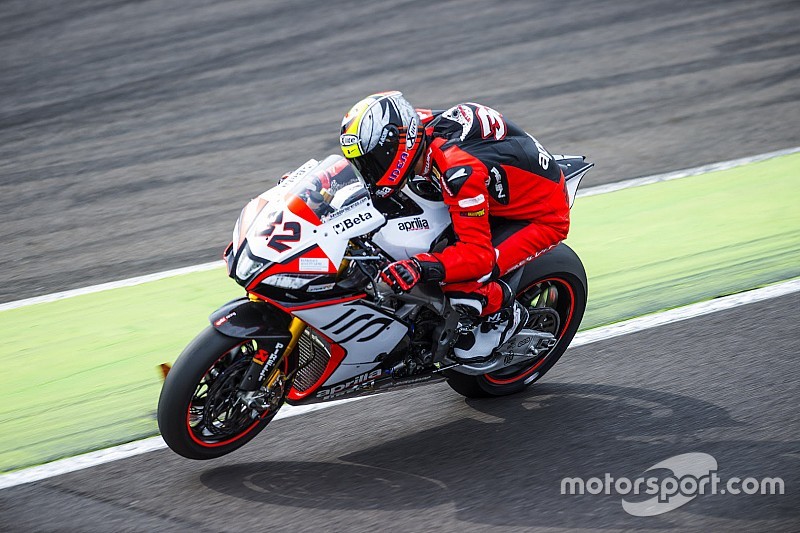 The rookie leads the way to Tissot-Superole 2 shoot out

WorldSBK rookie Lorenzo Savadori (IodaRacing Team) gave a glimpse of what could come ahead of the weekend’s races, by topping the timesheets on Friday afternoon at the Pirelli German Round. Local hero and Althea BMW Racing Team rider Markus Reiterberger made a solid comeback from injury to come home in second position, while Kawasaki Racing Team’s Tom Sykes put in a strong lap to round out the top three.

"I'm happy because it's the first time I've been to this track", said Savadori after topping the timesheets. "It's difficult to make an objective for the race because I don't know the track that well, I still hope to improve my feeling with the track and with the bike for tomorrow."

The pressure is on for German Reiterberger, as not only is it his home race, but his first weekend back from injury. "Overall I'm very happy to be back on my Superbike", said Reiterberger after the first day. "For sure the pressure is high with everyone here but i enjoy it a lot. I try to focus for the race. I just want to finish the race in a good way."

"I struggled to find speed all day", said Sykes after a tough session. "In the end we found something and I think we have to be happy with the setup we have. I feel that we're quite fast and consist so I'm really looking forward to the weekend."

Lausitzring proved to be a challenge for the field in both practice sessions with riders falling victim to notorious turns 6 and 12. The session was red-flagged with 21 minutes to go because of debris left on the track after Josh Brookes slid out at speed on turn 12, damaging his Milwaukee BMW. Thankfully the Australian was able to walk away unscathed.

Meanwhile, Aruba.it Racing-Ducati’s Chaz Davies stayed consistent over the day to come home in fourth ahead of Kentucky Kid Nicky Hayden in fifth, for the Honda World Superbike team. Pata Yamaha Official WorldSBK Team’s Sylvain Guintoli indicated he’s back in action after finishing in sixth position in the combined times and comfortably graduated to Tissot-Superpole 2.

Jordi Torres (Althea BMW Racing Team) once again proved to be a solid contender ahead of the weekend's races by leading for most of the second session in the combined times, before being knocked out of the top spot to finally come home in seventh.

Recently turned 26 year old Alex Lowes (Pata Yamaha Official WorldSBK Team) was an early victim of the bumps at turn 6, having suffered a crash midway through the session but still finished eighth in the combined standings. MV Agusta Reparto Corse rider Leon Camier - one of the only riders who didn’t test at the Lausitzring over the summer - brought his MV Agusta home in ninth, proving that rider talent will play a big role in qualifying and the races at the new circuit. Honda World Superbike Team’s Michael van der Mark put in a solid effort to round out the top ten and automatically graduate to Tissot-Superpole 2 on Saturday morning.

Reigning Champion Jonathan Rea struggled throughout the session and was knocked out of the top ten to finish in 11th. This is the first time the Northern Irishman has finished Friday outside of the top ten this season.

The Top Ten will be back in action on Saturday morning at 10:30am local time (GMT+2) for the Tissot-Superpole 2 shoot out.