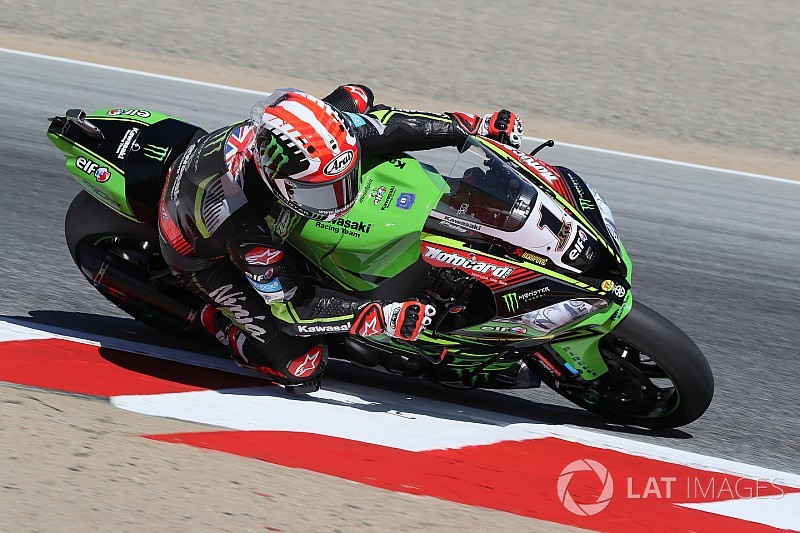 Jonathan Rea effortlessly completed the US World Superbike double after claiming his 62nd career win in Race 2 at Laguna Seca.

Eugene Laverty made the most of pole position and took the holeshot into the first corner, while Marco Melandri slotted into second ahead of Michael van der Mark.

Rea made up three spots from ninth at the start, and carved past his Kawasaki teammate Tom Sykes at the final corner to take fifth, while Laverty extended his lead to seven tenths.

Melandri succumbed to the pressure of van der Mark, and the Ducati rider soon found himself staring at the rear of Rea's ZX-10RR in fourth after making a mistake exiting Turn 10 on lap two.

Rea made light work of van der Mark at the last turn on lap four, and set about to close in on Laverty, who by now had opened up a lead of 1.3s on his Milwaukee Aprilia.

Laverty's lead was rapidly demolished by Rea, and it stood at just two tenths of a second at the start of lap eight.

Rea lined up the Aprilia man in front of him, and successfully executed a lunge at Turn 3 to snatch the lead, while Chaz Davies worked his way ahead of van der Mark two laps later for third.

Once in front, Rea was able to ease away from the rest of the pack, his lead 1.6s by lap 12, and he gradually extended it to over five seconds to cruise to his second win of the weekend.

Davies was able to reel in Laverty once free of van der Mark, and moved into second with nine laps remaining, which he held onto through to the chequered flag to secure back-to-back podiums on his Ducati in America.

Laverty was quickly caught by the warring Yamaha duo of van der Mark and Alex Lowes, but their scrapping allowed the Ulsterman to remain in third to claim his first WSBK podium since 2014 and Aprilia's first since '15.

Lowes launched a daring raid on his teammate at Turn 1 with three laps to go, but van der Mark just held sway.

The Briton tried another brave move on van der Mark on the run into the Corkscrew, and pulled it off to snatch fourth. Barni Racing's Xavi Fores trailed the Yamaha duo home in sixth.

Jordi Torres was seventh on his MV Agusta, while Sykes ended his 250th race start a lowly eighth. Jake Gagne ended his home round with a career-best ninth, with Loris Baz completing the top 10.

Gagne's Honda teammate Leon Camier crashed early on at the Andretti Hairpin, but remounted and got his Fireblade home in 13th ahead of rookie Karel Hanika.

Melandri fell out of contention on lap four at Turn 5, with Lorenzo Savadori and PJ Jacobsen joining him on the sidelines.