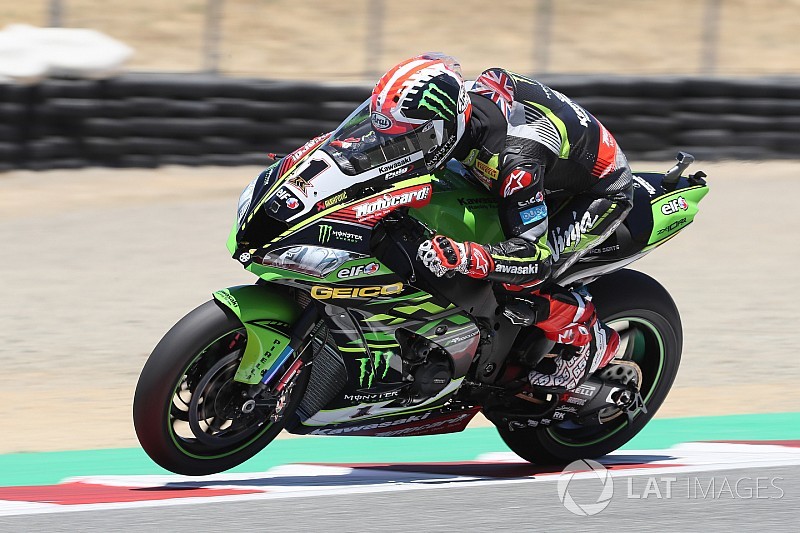 Jonathan Rea eased to victory in the opening race of the US World Superbike round at Laguna Seca after an early battle with second-placed Chaz Davies.

Poleman Davies held the lead on the run into the Andretti Hairpin at the start of the 25-lap race, with Rea nipping ahead of Kawasaki teammate Tom Sykes for second.

Rea attempted to take the lead at the final corner, but ran in too hot and Davies used his superior drive from the turn to reclaim the position as they started lap two.

Davies and Rea ran astern for the next five laps, easing two seconds clear of Sykes, who had Yamaha's Alex Lowes and the Milwaukee Aprilia of Eugene Laverty reeling him in.

A mistake for Davies at the Corkscrew allowed Rea to scythe up the inside and relieve the Ducati rider of the lead on lap seven, and the Ulsterman proceeded to keep Davies within seven tenths of a second up until the final few tours.

Davies managed to get to within six tenths of Rea with five laps to go, but a mistake put his deficit up to close to two seconds, which gave Rea a comfortable run to the chequered flag for his seventh win of the season.

Lowes crossed the line a distant third for his third rostrum appearance of the year on the Yamaha, with Laverty two seconds down in fourth. He will start race two from pole.

Marco Melandri recovered from a lowly 10th on the grid to snatch fifth away from Ducati stablemate Xavi Fores on the Barni bike in the closing stages, while Sykes slid to seventh at the end.

Michael van der Mark (Yamaha) put Sykes' seventh under pressure in the closing stages, but was just half a second shy at the line.

Jordi Torres got his MV Agusta home in ninth, while Jake Gagne ended his home race 10th on the sole remaining Honda, after teammate Leon Camier retired with seven laps to go and Triple M Racing's PJ Jacobsen was punted off at the Andretti Hairpin by Leandro Mercado (Orelac Kawasaki).

Mercado crashed at the Corkscrew just moments after the Jacobsen collision, while Toprak Razgatlioglu (Puccetti Kawasaki) suffered a nasty highside at the same corner with six laps to go, and was taken to the medical centre for checks.

Lorenzo Savadori fell from his Aprilia at the final corner on Lap 1, then remounted and benefitted from the attrition around him to finish 14th ahead of fellow crasher Loris Baz (Althea BMW).

Wildcard Josh Herrin was running inside the points when his Attack Performance Yamaha developed an issue with six laps to go. Fellow WSBK rookie Karel Hanika scored points on his debut in 13th for Guandalini Yamaha.

Rea's victory means he further extends his championship lead to by five points to 70 over Davies, while van der Mark holds onto third, albeit 91 points adrift.