Tom Sykes took the double on the team’s home round, in front of the 24,255 spectators attending the event, whilst Loris Baz ended up twice second.

Alcaniz (Spain) – The second round of the 2014 eni FIM Superbike World Championship was taken by storm by Japanese manufacturer Kawasaki, that claimed the first two steps of the podium in both World Superbike races, as well as coming out on top in World Supersport. and with the best classified EVO rider in race 2.

Tom Sykes took the double on the team’s home round, in front of the 24,255 spectators attending the event, whilst Loris Baz ended up twice second. The Kawasaki Racing Team pairing are now on top of the riders standings, with Sykes (75 points) leading and Baz just four points shy of his teammate. Aprilia Racing Team duo Sylvain Guintoli and Marco Melandri lie currently in third and fourth position respectively, with the Italian rider able to finish within the top 3 in the second and last race of the day. 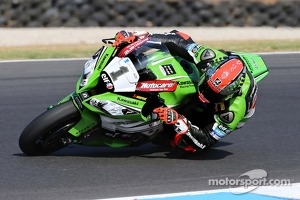 Jonathan Rea (Pata Honda World Superbike) stepped on the podium for the first time since the 2013 UK round at Silverstone, as the British rider was third in Race 1.

The next round of the eni FIM Superbike World Championship will take place at the Assen TT Circuit on April 27th.

Tom Sykes: “We scored two race wins today but after four or five laps of race two it felt far from perfect! Race one was very good and we had a good set-up that gave us a consistent pace on a cold track. I thought race two was going to be more straightforward in hot conditions so I went for the same SC0 as race one. The two guys behind me for sure had more grip than me but we were for sure able to put the Ninja ZX-10R on the pieces of tarmac those guys were looking for. I had a plan on the last lap to keep them behind me - and it worked.”

Jonathan Rea: “It’s been a really positive weekend for us to go back on the podium this early in the season. I really enjoy riding the bike at this circuit and we’ve made a lot of improvements since Phillip Island. In race one I ran into some rear tyre problems, but in race two we went with the softer option, which most of the grid changed to. We deserved two solid top fives today and I feel we can now take some momentum to Assen where we know the bike is good and build on this at a circuit I really enjoy.

The opening race at MotorLand Aragon has been won by Tom Sykes (Kawasaki Racing Team) after a masterful performance the reigning World Champion.

Sykes, who led from turn one was never headed, coming home seconds ahead of Loris Baz (Kawasaki Racing Team), with Jonathan Rea (Pata Honda World Superbike) completing the podium. Davide Giugliano (Ducati Superbike Team) crashed during the final lap whilst in second place, but the Italian rider was able to rejoin, eventually crossing the line in eighth place.

Twelfth place Leon Camier (BMW Motorrad Italia Superbike) was the winner in the EVO Category after a thrilling 17 lap race left the crowd enthralled in the Spanish sun, just ahead of local rider and other EVO entrant David Salom (Kawasaki Racing Team).

Guintoli still leads the standings, but he is now tied up in points with Baz, whilst reigning champion Sykes is just one point shy of the French duo.


The second race of the day at MotorLand Aragon was a carbon copy of race 1, with Kawasaki Racing Team riders Tom Sykes and Loris Baz dominating in the Spanish sun.

Baz who had been unable to stick with his team mate in the opening race looked a lot more comfortable this afternoon as did Marco Melandri (Aprilia Racing Team) who was incredibly fast at the end of the race, closing down the two green machines rapidly to put himself in the hunt for the victory.

In a spectacular final three laps the three riders exchanged places a number of times with the deciding move coming at the final hairpin at the Aprilia of Melandri went wide allowing Sykes and Baz to claim a 1-2 finish for the second time today. Melandri finished 3rd.

Race one EVO winner Leon Camier (BMW Motorrad Italia) was involved in a race long dual with Althea Racing Ducati’s Niccolo Canepa and local rider David Salom (Kawasaki Racing Team) with Salom taking the EVO honours after a last lap mistake from the BMW rider dropped him to 12th overall, handing the category victory to the local rider ahead of Canepa.