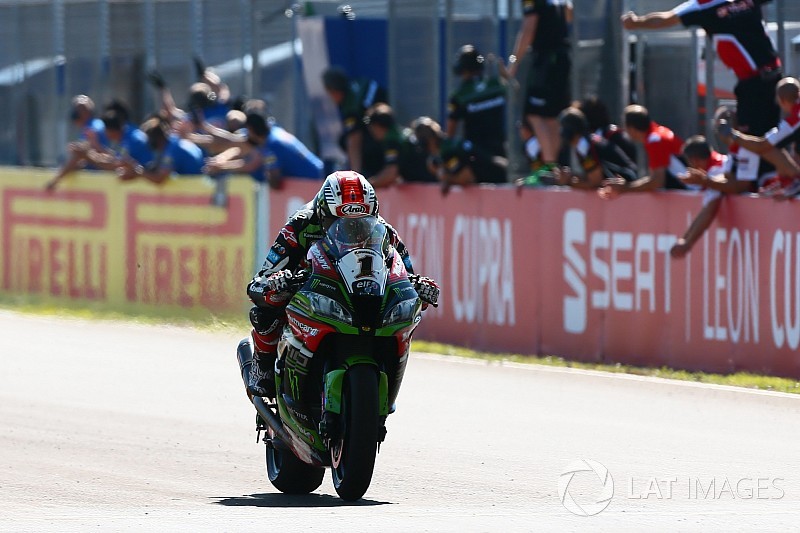 Jonathan Rea took his 13th victory of the 2017 World Superbike season after Marco Melandri retired from the lead with a mechanical failure in the Saturday race at Jerez.

The race was red-flagged on the opening lap after Raffaele de Rosa and Ayrton Badovini both crashed separately at Turn 6.

While it was De Rosa who seemed to have a bigger crash with a violent high-side, it was Badovini who sustained an injury, fracturing his collarbone.

Rea had a slightly better start from second than polesitter Melandri and was leading when the red flag was out.

Further behind, Tom Sykes and Michael van der Mark made small contact and were close to crashing at Turn 2, but both escaped with slightly running wide.

After 20 minutes of track cleaning for de Rosa and Badovini's crashes, the race was restarted in the original grid order, as the opening lap was not completed.

The second start saw Rea once again steal the lead from Melandri, with the duo's respective teammates Sykes and Chaz Davies immediately moving up to third and fourth respectively.

Rea was unable to pull away from Melandri and the latter managed to find his way past the champion on Lap 6.

Davies then also passed Rea on the main straight next time around, but the Kawasaki rider fought back with a forceful move at the Curve Lorenzo.

The swap allowed Melandri to build a one-second gap, and the Italian looked set to win only for his bike to slow down with a mechanical failure with four laps to go.

Melandri's misfortune was followed by Rea cruising to the finish, as he had already built a safe gap over Davies and Sykes.

Rea's winning gap was 1.137s, with Davies having to keep Sykes at bay until the chequered flag to secure second.

The Yamaha duo of Alex Lowes and van der Mark kept up with the top four for the majority of the race before losing ground in the dying stages but still comfortably completing the top five.

Both Hondas retired from the race, Takumi Takahashi crashing and Davide Giugliano retiring in the pits.