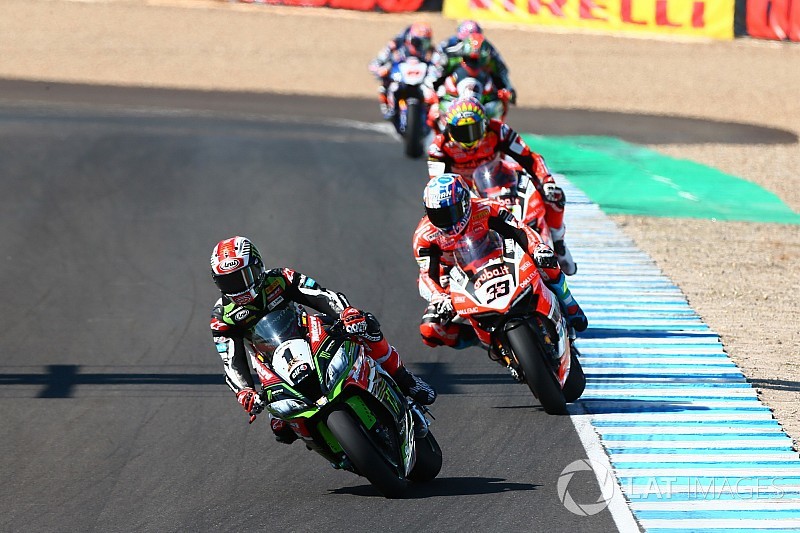 An incident involving Chaz Davies and Eugene Laverty at Turn 2 on the opening tour brought out an early red flag, with the race distance being reduced to 19 laps.

Rea had moved up from ninth on the grid to fourth by the end of the first lap of the original start when it was stopped, and his progress in the second start was even swifter, as he was up to second by the final corner of the opening lap.

He technically crossed the start/finish line in the lead ahead of Michael van der Mark, but couldn't clear the Dutch rider in earnest until midway round the second lap.

From that point, there was no stopping Rea, who raced to a one-second lead within two laps and ended up 2.7s clear of the opposition at the finish to clinch the 52nd WSBK win of his career.

It moves him level with Troy Bayliss, with only Carl Fogarty (59) still ahead in the all-time winners' list, and also wrapped up the manufacturers' title for Kawasaki.

While Rea's win was never in doubt from lap 2 onwards, the battle for second was more intriguing, as van der Mark headed a train comprising the two works Ducatis, Yamaha teammate Alex Lowes and the second Kawasaki of Tom Sykes in the early stages.

Marco Melandri was the man with the pace, but his progress was slowed by him running wide on several occasions while trying to attack van der Mark.

Melandri then soon caught up with teammate Davies, finally making his move at the first corner at the start of the penultimate lap.

Soon after dropping behind Melandri, van der Mark ran wide, dropping him behind teammate Lowes, while another error by the Dutchman the following lap saw him drop behind Sykes into sixth.