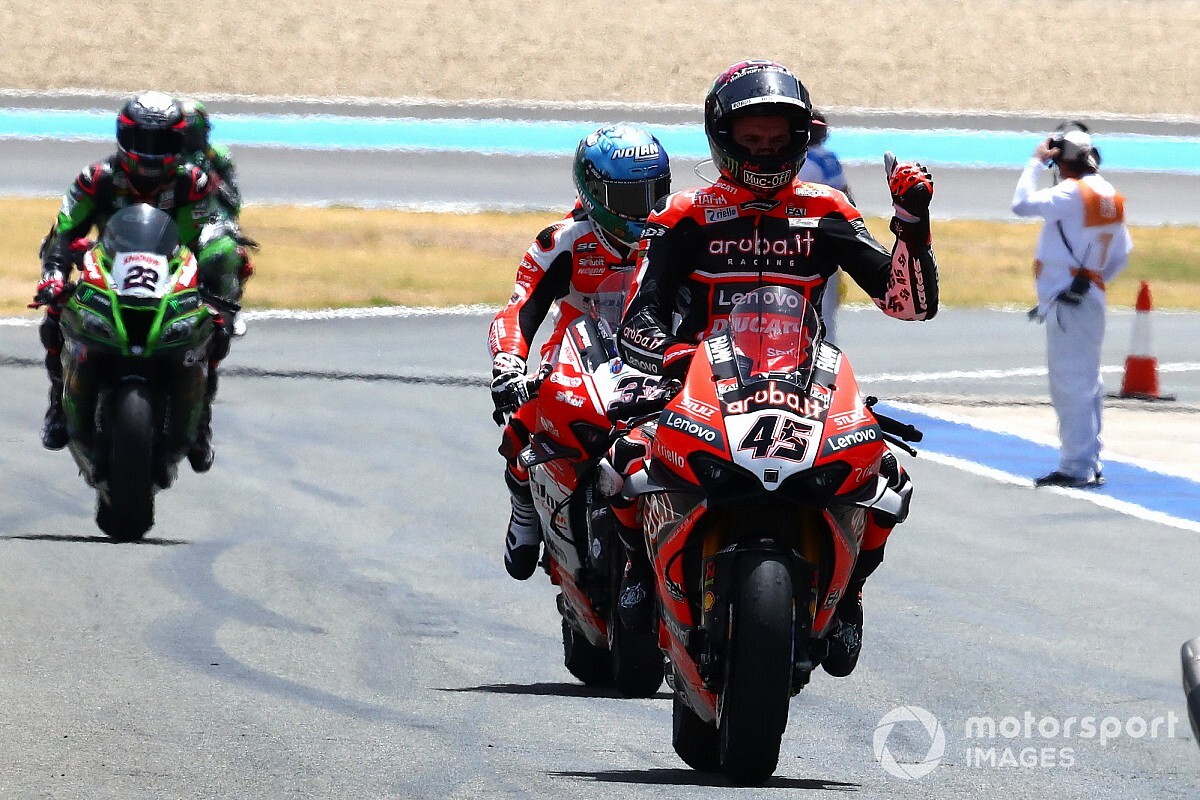 Scott Redding doubled up at Jerez with victory in the second World Superbike feature race to increase his championship lead as reigning champion Jonathan Rea struggled to sixth.

WSBK rookie Redding bagged his first win in Saturday’s feature race and added another podium to his tally in Sunday’s Superpole race to take a nine-point standings lead ahead of the final outing in Spain.

As was the case in the previous two races, Kawasaki’s Rea grabbed the holeshot at the start – this time from pole by virtue of his Superpole race win – ahead of Redding and Ten Kate Yamaha man Loris Baz.

Redding would find a way past Rea at the start of the second lap, with factory Yamaha rider Toprak Razgatlioglu moving up to third having started 10th and having crashed on the sighting lap prior to the race.

Redding put a second between himself and Rea as they started the fourth tour, which extended by a further half a second over the fifth lap.

The Kawasaki rider appeared to be struggling with his ZX-10RR and would soon slip behind the sister Ducati of Chaz Davies, who had cleared Razgatlioglu on the third lap.

Rea soon came under attack from Razgatlioglu, with the Yamaha coming through at the start of lap six – though was forced to fight back through Turn 7 and 9 after Alex Lowes made a failed passing bid on the pair of them at Turn 6 and forced the Turkish rider out wide.

Razgatlioglu made a move on Rea stick two laps later at Turn 6 and quickly pulled away into a safe third spot.

At the front, Davies managed to cut Redding’s lead down to 1.7s at half distance, but Redding soon responded to get the gap back to over two seconds for an untroubled run to the chequered flag.

Davies secured his first podium of the 2020 season and the 90th of his career to complete a Ducati 1-2, with Razgatlioglu grabbing another third-place finish.

Rea’s woes continued as the race wore on, with Go Eleven Ducati’s Michael Ruben Rinaldi and then the sister KRT bike of Lowes demoting the world champion to sixth.

Rinaldi equalled his best WSBK result in fourth, ahead of Lowes and Rea, while Yamaha’s Michael van der Mark was seventh.

Alvaro Bautista was top Honda runner at the chequered flag in eighth ahead of Barni Ducati’s Marco Melandri and the GRT Yamaha of Garrett Gerloff.

Redding’s championship lead now stands at 24 points over Rea heading to next weekend’s third round in Portugal.