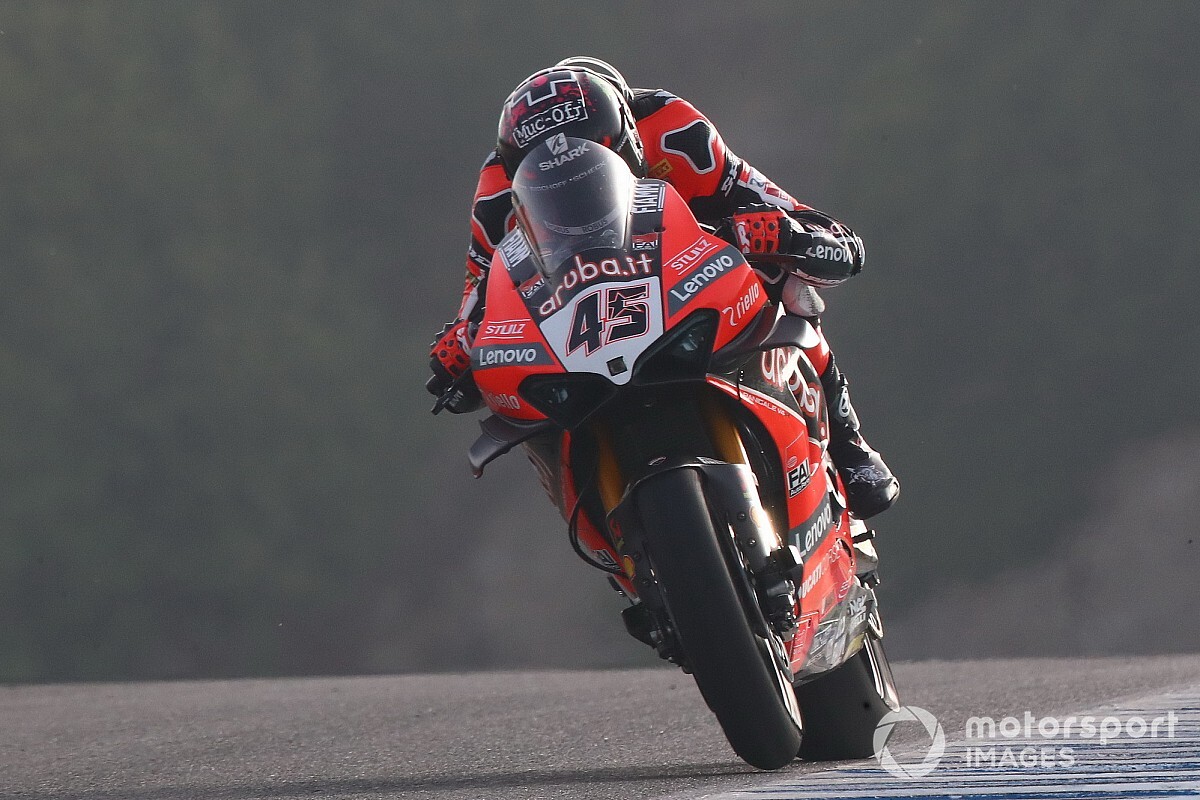 The two-time MotoGP podium finisher was promoted to the works Ducati squad in WSBK this year having won the British Superbike title last season for the Italian manufacturer.

Beating Rea to pole by 0.034 seconds, Redding usurped the Kawasaki rider in the latter stages to score his first win in just his fourth WSBK start.

Reigning champion Rea jumped a slow-starting Redding off the line to take the lead into Turn 1, with Yamaha man Toprak Razgatlioglu coming from fifth to second ahead of the Ducati and BMW’s Tom Sykes.

The latter would run wide at Turn 6, which allowed Ten Kate Yamaha rider Loris Baz to come through into fourth and get stuck into the podium battle in the early stages.

Baz would quickly just lose touch with the top three, with Sykes in turn isolating himself into fifth before a technical issue forced him into the pits on lap five.

Rea would lead Razgatlioglu and Redding until lap 12, when the Ducati rider finally lined up and move on the Yamaha to snatch second away at Turn 6.

The top two immediately built up a small buffer to Razgatlioglu, though this was wiped out when Redding launched a raid on Rea into Turn 6 on lap 14.

Redding used the power of the V4 R to draw alongside Rea on the run into the Pedrosa corner and muscled his way through, Rea only just holding second having been forced out wide.

The Ducati rider almost allowed Rea back through on the following tour when he ran deep into Turn 6, but managed to hold the position.

Redding would come under no threat to the chequered flag, with Rea trailing him in second.

Razgatlioglu came under attack from a resurgent Chaz Davies on the second works Ducati for the final podium place, but resisted his advances to secure the last rostrum spot.

Baz was relegated to fifth come the chequered flag, while Michael Ruben Rinaldi was sixth on the Go Eleven Ducati to back up the strong pace he showed in Friday practice.

Alvaro Bautista got the Honda to the line in seventh, while the returning Marco Melandri rose from 19th to eighth in his first outing for the Barni Ducati team ahead of pre-race points leader Alex Lowes (Kawasaki) and the second works Honda of Leon Haslam.

Michael van der Mark was forced out of the race on lap nine when his Yamaha expired.

Redding’s win now puts him into the lead of the WSBK standings by six points from Lowes.