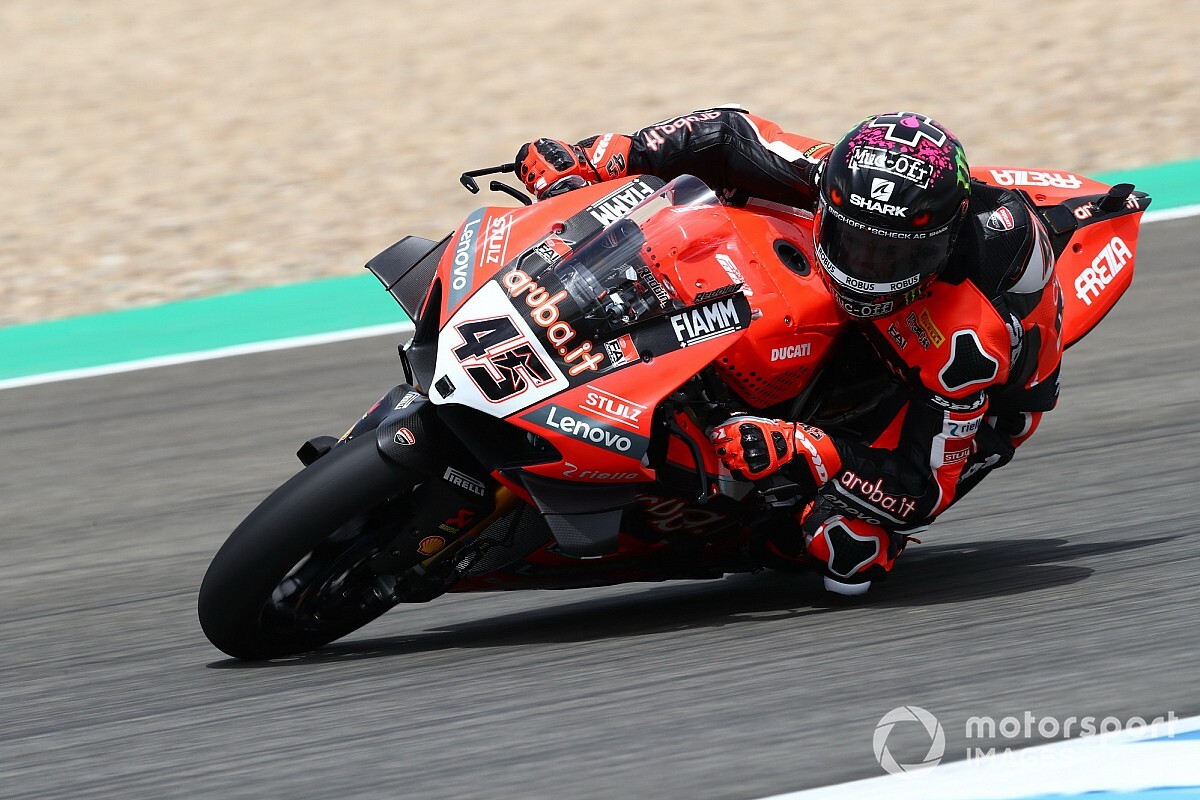 Scott Redding snatched his maiden World Superbike pole by 0.034 seconds from Jonathan Rea at Jerez, while championship leader Alex Lowes was 14th after a crash.

Toprak Razgatlioglu set the pace early in the 25-minute session on the race tyre, with the Yamaha rider going half a second clear of the field with a 1m39.208s.

The sister factory Kawasaki of Lowes had his session interrupted by a low-speed off at the last corner just four minutes into the session, which meant he was only 18th after the first runs had been completed.

Lowes wouldn’t be able to recover much on his qualifying tyre run late in the session and could only manage 14th.

Honda’s Leon Haslam made the first big move on the Q tyre in the final five minutes, lifting his Fireblade up to third briefly.

Moments later, Tom Sykes began lighting up the timing screen on his Q tyre lap on the BMW and converted that pace into provisional pole with a 1m38.776s.

Looking relatively comfortable with a half-second advantage, Sykes’ hopes of back-to-back poles in 2020 were soon dashed as Redding came through on the Ducati.

The reigning British Superbike champion edged ahead of Sykes with a 1m38.736s, though this wasn’t safe as Rea set fastest sector times on his first Q tyre lap.

The Kawasaki lost 0.011s relative to Redding in sector three, and bled a tiny bit more time through the final split to end up 0.034s behind with a 1m38.770s.

Rea set off on a final attempt and was fastest through the first two splits. However, he lost half a second through the third split and called a halt to his charge, leaving Redding to claim his first pole in the series.

Sykes held onto a front row spot in third, 0.040s off Redding, with van der Mark heading row two on the Yamaha.

Razgatlioglu’s Q tyre lap was blighted by traffic and he aborted the run with a couple of minutes remaining in the session. The Turkish rider will start fourth ahead of Friday pacesetter Ten Loris Baz on the Ten Kate Yamaha, while Chaz Davies (Ducati), Alvaro Bautista (Honda), Haslam and Michael Ruben Rinaldi (Go Eleven Ducati) complete the top 10.

Leandro Mercado crashed his Motocorsa Ducati midway through the session, wrecking the bike in a fast off at Turn 4. He’ll start 20th in Race 1 this afternoon behind the returning Marco Melandri on the Barni Ducati.