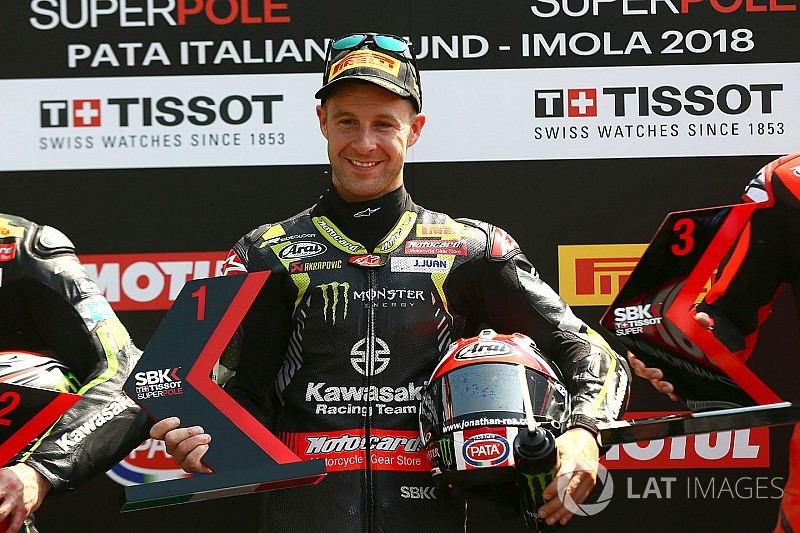 Jonathan Rea eased to his second World Superbike pole of the year ahead of Kawasaki teammate Tom Sykes, while Chaz Davies recovered to third at Imola after an early crash.

Final practice pacesetter Rea went to the top straight away on his first race tyre lap in the second Superpole session with a 1m47.078s, though was quickly deposed by Sykes with a 1m46.540s.

However, Sykes was knocked back to 12th after his lap was cancelled for exceeding track limits at the final chicane, while Rea returned to the top of the pile with a 1m46.418s.

Ducati's Marco Melandri set the initial pace on the qualifying tyre in the closing stages of SP2 with a 1m46.227s, with Sykes taking over from the Italian with just seconds remaining with a 1m46.109s.

But Sykes would be denied the opportunity to set the all-time WSBK pole record as Rea went 0.312 seconds clear of his teammate to claim his first pole at Imola since 2014.

Davies crashed at the final corner early in SP2, but was able to re-join the session and get his Panigale back to pitlane for repairs, before going on to secure his first front row of the season on his qualifying tyre lap.

Melandri heads row two on the sister works Ducati, the Italian edging ahead of Ducati stablemate Xavi Fores on the Barni bike and Aprilia's Eugene Laverty, who makes his return to action this weekend having been out since his horror Thailand crash in March.

Jordi Torres will start seventh on the MV Agusta, the Spaniard pipping Michael Ruben Rinaldi (Ducati) and the sister Aprilia of Lorenzo Savadori, while Yamaha's Alex Lowes completed the top 10.

Loris Baz will line up 13th for his first race at Imola in four years, while Toprak Razgatlioglu was set to graduate to SP2 but will start 14th instead after having his final lap cancelled for cut the final chicane.

Ten Kate Honda stand-in Jason O'Halloran – who is replacing the injured Leon Camier this weekend –  will start his debut WSBK race from 18th and ahead of teammate Jake Gagne.