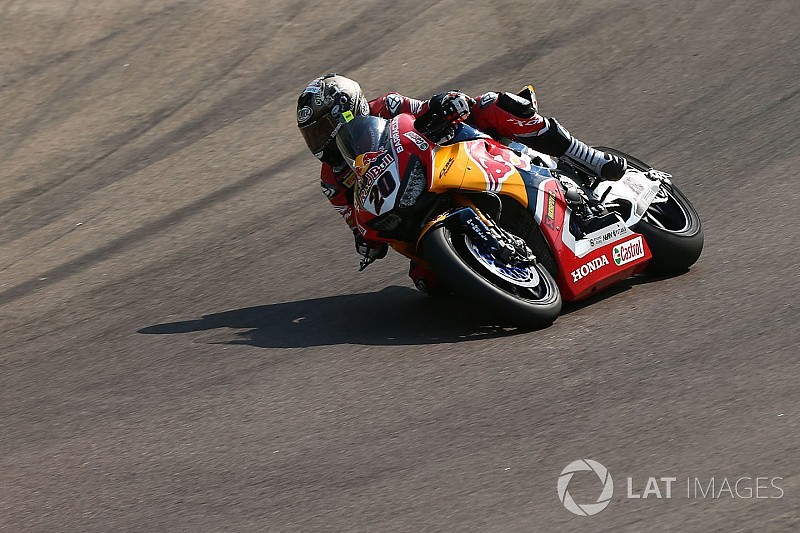 Ten Kate Honda World Superbike stand-in Jason O'Halloran has been taken to hospital having suffered a fracture to his right leg in a crash during Race 1 at Imola.

British Superbike frontrunner O'Halloran was drafted in on Friday afternoon at Imola after Leon Camier decided to withdraw from the remainder of the weekend due to ongoing injury issues.

Camier suffered fractures to three ribs and a lung contusion in a horror accident at Aragon, where he crashed and was hit by MV Agusta's Jordi Torres.

The Briton – who missed the Assen round as a result of his injuries - had been passed fit to ride on the Thursday of the Imola weekend and contested the first two 40-minute sessions on Friday, completing a race distance in FP2.

O'Halloran, who had no WSBK experience prior to FP3 on Friday, managed to outqualify teammate Jake Gagne in 18th in Superpole, and was just a tenth slower than Honda stablemate PJ Jacobsen in 17th.

The Australian suffered a highside at the Villeneuve chicane on lap two and was taken to the medical centre, where it was confirmed he had fractured his right lower leg.

A statement via Twitter from the Ten Kate team said: “We have had an update from the Clinica Mobile.

"Unfortunately, Jason O'Halloran has a fracture in his lower right leg and is on his way to Imola hospital."

Teammate Gagne has just missed the points in Race 1 in 16th on his return to action, having missed the Assen round through injury, while Honda stablemate PJ Jacobsen did not start due to issues with his Triple M bike.