Alvaro Bautista believes Honda's first podium of the World Superbike season last weekend at Barcelona is a just reward for the improvement that the Japanese manufacturer has made in recent rounds.

After qualifying down in 16th on Saturday morning, Bautista finished ninth in a wet first race of the weekend that afternoon before his fortunes turned around dramatically on Sunday.

In a Superpole race that was shortened to five laps following a red flag, Bautista surged forward to finish third behind title protagonists Jonathan Rea and Toprak Razgatlioglu and bag Honda's first rostrum of the season.

Up to that point, Bautista had scored just one top-five all season in July at Assen amid a difficult second season aboard the underdeveloped Honda CBR1000RR-R, with the bike's lack of performance leading him to spurn Honda in favour of a return to Ducati in 2022.

Following the Assen round, Bautista had predicted that Honda would fail to finish on the podium all season, but at Barcelona the Spaniard spoke of the progress the marque has made in recent weekends.

"[On Sunday] in the morning without changing anything on the bike, it felt like another bike [compared to Saturday]," recalled Bautista. "The grip was there, I could use it, I could go fast, I could push… I enjoyed riding the bike. We had our normal problems, but no more than normal.

"I knew the Superpole race would be difficult, it was just a few laps and I started far back on the grid, but I did a good start, gained some positions, I was seventh before the red flag. I did also a good start [on the restart] and I kept my concentration, this allowed me to finish third.

"The last three or four races, we’ve had a really good base set-up that allows us to start each weekend with the same feedback as the weekend before. We have our [main] work done and we adjust for the weekend.

"I hope to make some small improvements for the next race and try to reduce the gap, because now we need to be closer. I want to be closer to the top guys, everybody is working very hard, but this result is for HRC, and all the team. I think we deserve something like this." 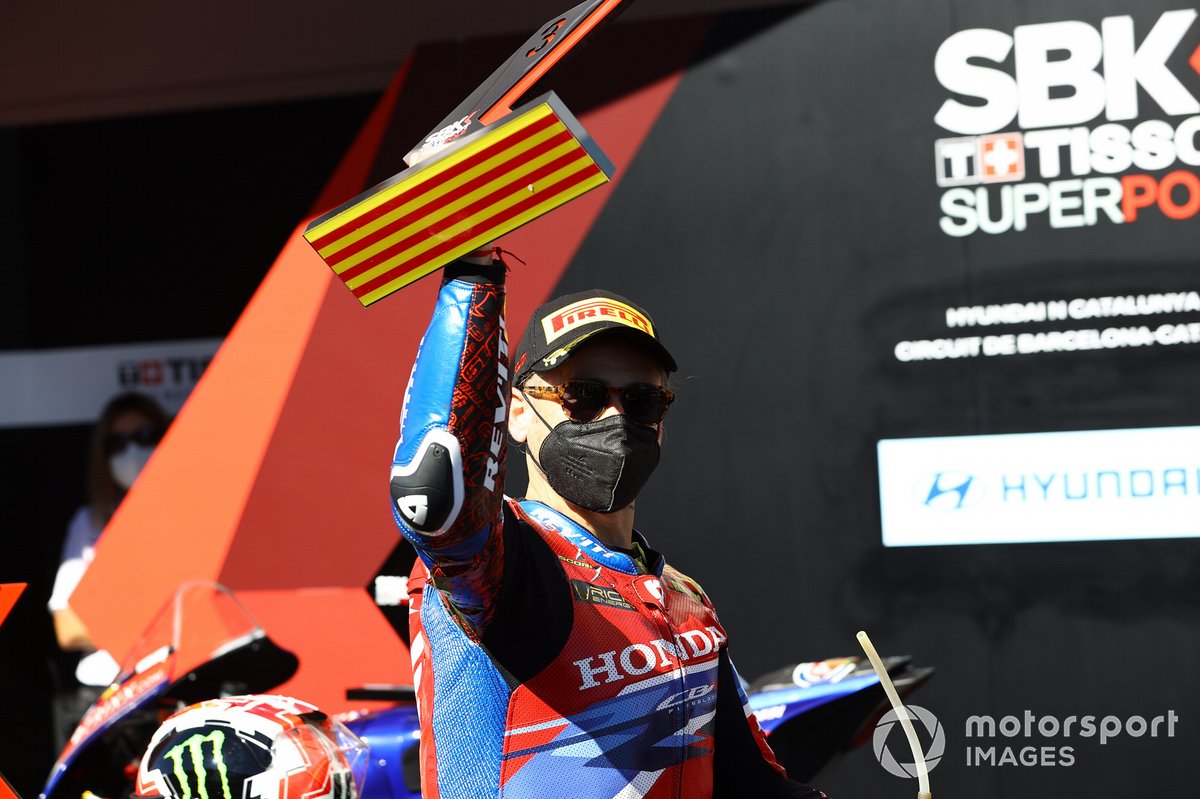 Bautista completed a strong weekend with fourth place in the second full-distance race of the weekend, albeit losing the chance to replicate his Superpole race result after encountering late brake trouble.

That has allowed the Spaniard to break into the top 10 of the riders' standings with four rounds to go and pull further away from teammate Leon Haslam, who could only manage a best finish of seventh at Barcelona.

"Track conditions were more tricky [in Race 2] and I felt not as good as in the morning, but not as bad as Friday," said Bautista. "I didn’t have the same performance for braking and exiting the corner.

"In any case, I tried to stay there in the front group. But I had some brake issues and I had to adjust the lever every two laps, because the lever was coming close to my hand.

"One time I braked I didn’t have a lot of lever [travel], so I missed the corner, I went out [of the track], I lost one second and I lost the chance to fight for the podium because it was four laps to go, but I arrived very close."

Bautista's results have also allowed Honda to close in on BMW in the battle for fourth in the manufacturers' standings, although the German marque remains 46 points clear.