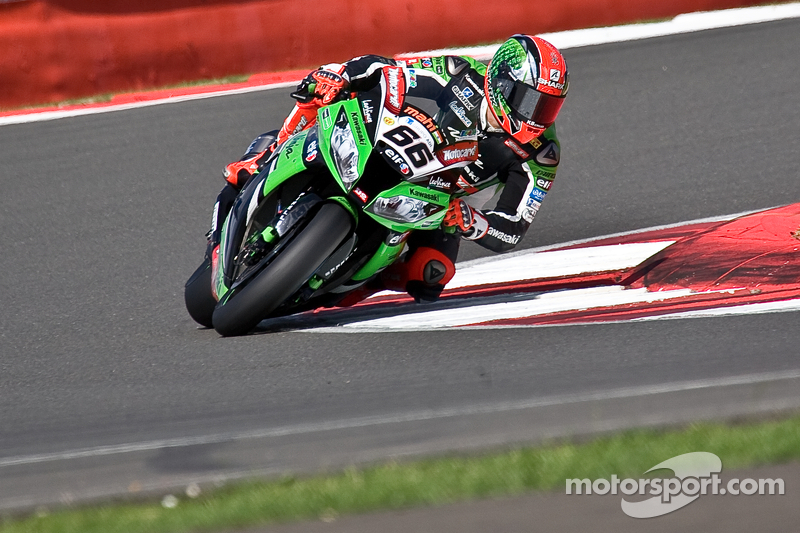 Jerez (Spain), Sunday 20 October 2013 - The eni FIM Superbike World Championship season drew to a close today after the last race of a spectacular year. Many riders were in the spotlight in Spain but above them all was Tom Sykes (Kawasaki Racing Team) who achieved a historical milestone for both himself and the Japanese manufacturer. The British rider grabbed his first-ever World Superbike title today and completed an outstanding record of 8 Tissot-Superpoles and 9 race wins with his 17th podium finish of the year, a second place in Race 2 behind Eugene Laverty (Aprilia Racing Team).

The Irishman battled out with Sykes throughout the first half of the race, eventually overtaking the Brit at the of the thirteenth lap and pulling away, to claim his second double-win of the season and the ninth race victory – same number of wins as the new Champion. Other works Aprilia rider Sylvain Guintoli (Aprilia Racing Team) completed again the podium by crossing the line a lonely third, ahead of Toni Elias (Red Devils Aprilia), Chaz Davies (BMW Motorrad GoldBet) and Leon Camier (FIXI Crescent Suzuki).

Lorenzo Lanzi (Mesaroli A.S. Ducati) finished his weekend on a positive note as he ended up 7th, followed by Jules Cluzel (FIXI Crescent Suzuki), Mark Aitchison (Team Pedercini Kawasaki) and Davide Giugliano (Althea Racing Aprilia). Local Xavi Forés (Team Ducati Alstare) crashed out of Turn 1 right after the start of the race, due to a collision with another rider, while Marco Melandri (BMW Motorrad GoldBet) did not line up on the grid due to the injured ankle that bothered him also in the first race.

Tom Sykes: “Words cannot describe how I feel. I am very level headed but since Magny-Cours there are moments where my mind started dreaming. When I was dreaming I had goose bumps and it was magical to even dream I could be world champion. But that was maybe 2% of what I am feeling now after winning the title. It was good for the championship that it got decided at the final round again, especially here with these great fans. My team is mostly Spanish so it is a home round for them. The championship win has not fully sunk in yet but it will do soon, I’m sure.”

Eugene Laverty: “Two wins that came in different ways, as the second one was kind of easier because I was able to pull away from Tom once I got passed him. I'm happy with this double-win that extended our podium streak in the final part of the season. It's a shame that we lost some points early on in the year, but I'm not the type of guy who likes to make excuses. Second place overall is a great result, as well as the Manufacturers' title."

Sam Lowes (Yakhnich Motorsport Yamaha) put the icing on the cake of his title-winning season by crossing the line victorious after the 20-lap World Supersport final race of 2013. The Englishman had his last, successful battle, with Kenan Sofuoglu (Mahi Racing Team India Kawasaki): the Turk did his best to keep the lead after several overtaking manoeuvres, but Lowes managed to pass him once more, with two laps to go, and pulled away for the win.