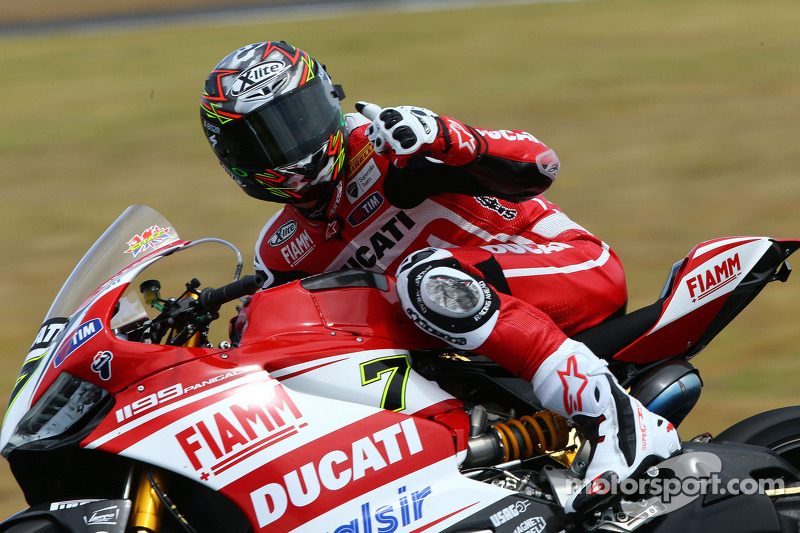 What can Davies and Giugliano do at Assen?

Borgo Panigale (Italy), Tuesday 22 April 2014 – the historic TT Circuit of Assen is the next destination for the World Superbikes, and the Ducati Superbike Team is more than ready for the challenge that the Dutch circuit presents.

The TT circuit is one of the ‘temples’ of motorcycle racing and has hosted international competitions since 1925. The Assen track, located in the Drenthe province of The Netherlands, has featured on the Superbike calendar every year since 1992.

Rider Davide Giugliano scored his first ever Superbike podium at the TT circuit, when he finished race 1 in second place in 2012. Chaz Davies’ best result so far was a fifth place finish obtained during the 2013 race weekend. 2011 brought success for both riders, with Davies winning his Supersport race at the Dutch track, while Giugliano scored the win in the Superstock 1000 category.

At this year’s most recent Superbike round, which took place just over a week ago at Motorland Aragón in Spain, Davies closed the day’s first race in fourth place, before scoring the fastest lap of race 2 while Giugliano finished eighth in Race 1, and concluded the day’s second race seventh.

The two Ducati factory riders thus head into this third round of the championship, taking place from 25 to 27 April, in seventh (Giugliano) and eighth (Davies) position in the general standings.

Quotes ahead of the event:

Davide Giugliano – Ducati Superbike Team #34 “Assen is a fantastic circuit that is also very unique. It’s always great to ride there and I have particularly good memories of the place as I took my first Superstock podium there and then also my first Superbike podium, two years ago. Seeing as we’re coming from Aragón where we proved to be fast despite the fact that it’s not an easy track for us, I hope that in Assen we are able to put everything that we have together in order to score some good results.”

Chaz Davies – Ducati Superbike Team #7 “I enjoy racing at Assen despite the fact that I haven’t had the strongest race results there with the Superbikes yet. It should suit the Ducati fairly well though, and I’m quite confident. If we work hard during the sessions we should be in a position to fight for good results on race day. The weather in Assen usually plays a part too, so we’ll have to see what conditions are like and then work to adapt my 1199 Panigale to the track accordingly.”