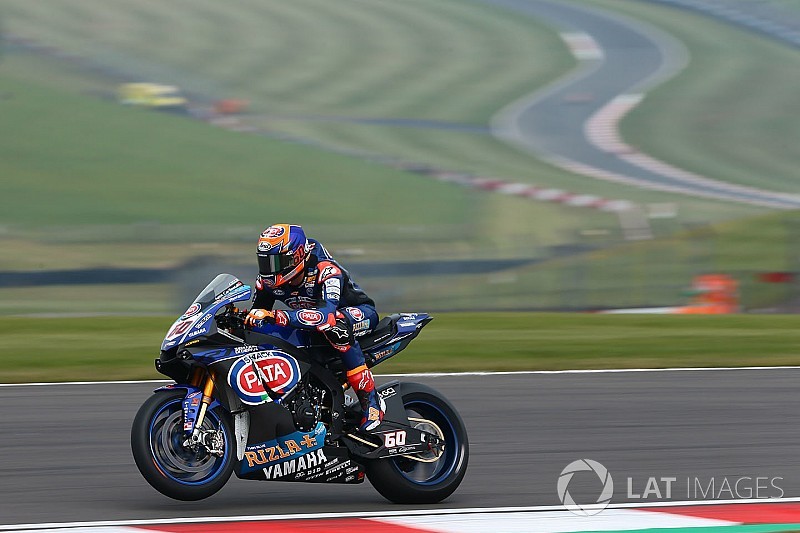 Aprilia's Lorenzo Savadori took the holeshot into Redgate at the start ahead of Puccetti wildcard Leon Haslam and poleman Alex Lowes.

Lowes dispatched of Haslam into the Melbourne Loop at the end of the first lap, and moved ahead of Savadori into the Old Hairpin just moments later.

Haslam also cleared Savadori on lap two to lead the chase on Lowes, but crashed at the Melbourne Hairpin.

The drama behind allowed Lowes to open up a gap of over a second to Yamaha teammate van der Mark, who passed Savadori with a daring move on the inside of the Craner Curves.

The Dutchman proceeded to close in on Lowes, while Rea chased them having moved ahead of Savadori for third on lap eight.

A mistake from van der Mark at Melbourne Loop allowed Rea to move into second on lap 11, with the top three running line astern for much of the second half of the race.

Rea launched his first assault on Lowes' at Redgate on lap 15, but ran wide and let Lowes back through, doing the same the following lap at Melbourne Loop.

However, the KRT rider succeeded at the next turn, with van der Mark following the Northern Irishman through on Lowes at the first corner.

He pulled Rea in over the next lap, and scythed past into Melbourne Loop on lap 17, and opened up an advantage of over a second to comfortably secure his second successive WSBK win.

Rea came under attack in the closing laps from Razgatlioglu on his customer Kawasaki, and got the better of the championship leader on the final lap to secure his maiden podium and the first for a Turkish rider in the WSBK.

Long-time leader Lowes crossed the line just two tenths back from Rea, who extends his points lead to 64, in fourth, while Ducati's Chaz Davies completed the top five ahead of the second KRT bike of Sykes.

Savadori ended up a distant seventh at the chequered flag, with Leon Camier gritting his teeth through ongoing injury issues to finish eighth.

Jordi Torres and Loris Baz rounded out the top 10, while Marco Melandri – who crashed in Race 1 - could only manage 11th.

British Superbike wildcard Luke Mossey got his Pedercini Kawasaki across the line in 14th for his first WSBK points ahead of BSB rival Bradley Ray on the Hawk Suzuki.

Along with Haslam, Eugene Laverty, Mason Law, Roman Ramos, Xavi Fores all failed to finish, while Michael Ruben Rinaldi didn't even get off the line after his Ducati stalled on the grid.

Van der Mark: Yamaha "not there yet" despite maiden win

Sykes: WSBK rules "screw us to the ground"