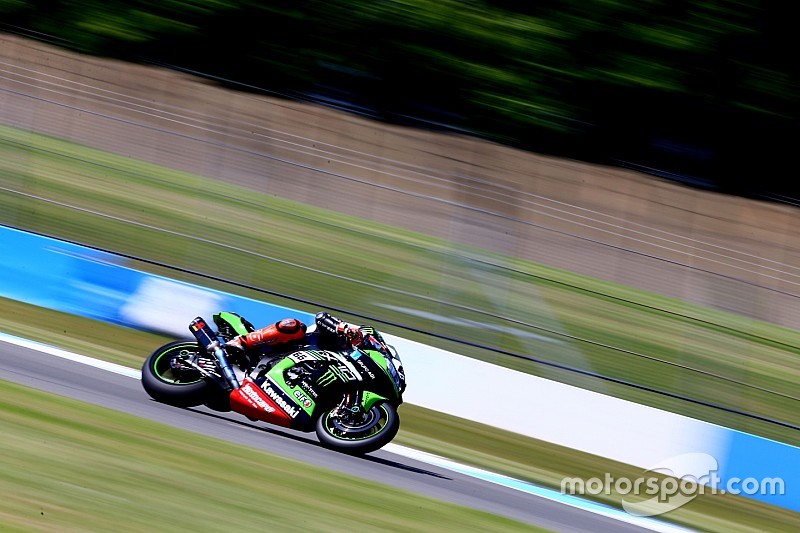 Tom Sykes continued his dominant record at Donington Park by winning his ninth consecutive World Superbike race at the British track, as Jonathan Rea and Chaz Davies both crashed.

Pole-sitter Sykes fell behind Davies and Rea in the early stages of the race, but made his way back to the lead after putting his Kawasaki teammate under pressure for several laps.

It was Ducati rider Davies taking the early lead of the race, but he only held on to the position for five laps before falling at Goddards.

The Welshman crashed out from the lead for the second time this year, as he also fell on the final lap of the first Aragon race.

However, Sykes quickly closed the gap on the championship leader, and soon made a move at the Melbourne hairpin, only to run wide a corner later and allow Rea to regain the position.

He made the same move stick four laps later, and rapidly pulled away to the tune of five seconds in two laps, with Rea seemingly suffering from tyre issues.

Rea then slid off his bike at the Craner Curves left-hander, and retired from the race.

Sykes cruised to the finish afterwards to take his first win of the season with a gap of 16.5s over Haslam.

Michael van der Mark brought the second Yamaha into the top five, followed by Leon Camier (MV Agusta) and Leandro Mercado (Ioda Aprilia), the Argentinian running as high as fourth at one point.

Davies rejoined after his early fall and recovered to eighth, which will allow him to start Sunday's Race 2 from second on the grid behind Jordi Torres (Althea BMW), who finished ninth.

Sole Honda rider Stefan Bradl was another non-finisher after pulling into the pits with seven laps remaining.