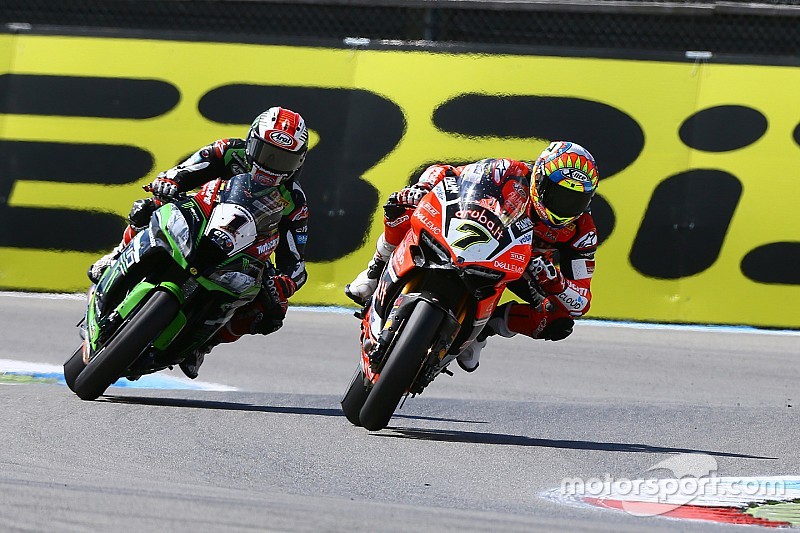 Chaz Davies has accused Jonathan Rea of deliberately blocking him in World Superbike qualifying at Assen, and also slammed the championship leader for his refusal to take blame for the incident.

Davies' second qualifying flyer was ruined when he caught up with a slow-moving Rea, and was forced to abort his lap.

The incident then escalated into an argument in parc ferme post-session that was caught by television cameras, with Davies calling Rea a "prick".

Rea was subsequently given a three-place grid penalty for the first race of the weekend, which he went on to win.

Late on Wednesday evening, Davies released a lengthy statement on his Facebook page in which he apologised for his language - but said he remains convinced Rea, who he refers to as '#65' throughout, deliberately tried to ruin his qualifying lap.

"After the incident, another rider who was on his 'in lap’ and saw everything unfold confirmed exactly my thoughts that #65 was looking over his shoulder with intent from early in his in lap," wrote Davies.

"At Turn 5 it’s very easy to glance across the circuit to all the way through Turns 2, 3 and 4 to see which riders are coming.

"#65 stayed well off the gas, taking another look over his shoulder during Turn 6 (seconds before the incident) which unfortunately wasn’t broadcast on the replay, but it is shown on the full Superpole 2 session video on the WorldSBK website.

"I saw this look behind on track and then again on the full video clip when I was called to Race Direction - it was clear for all of us to see.

"#65 knew I was coming and endangered both of us with his underhand games. Of course he will deny this, but the facts, video and Race Direction penalty prove otherwise.

"#65 knew I would abort my lap, but, if I had have committed to Turn 7, there’s a strong chance neither of us would have made the grid.

Rea's "arrogance was off the scale"

In addition, Davies also slammed Rea for initially not taking the blame for the incident in parc ferme.

The Ducati rider continued: "Fast forward a couple of minutes into parc ferme and once I saw #65 I made the Italian gesture of a pinched together thumb and fingers, translate - “what the hell were you thinking?”. I expected a different reaction to what came.

"#65 went straight on the defensive saying he hadn’t seen me, claiming he was off line anyway, why was I on the outside of him, I shouldn’t have been anywhere near him.

"It was a good attempt at turning the situation around to put the blame on me.

"There was everything but a simple apology, which, had it arrived straight away, would had instantly defused the situation.

"At that point I tried to put across the severity of the situation, but his arrogance was off the scale.

"I threw the regrettable profanities at him and finally, after heated exchanges, he begrudgingly offered his hand as an apology.

"As far as I was concerned it was too late and I didn’t feel like it was genuine so I declined. He was happy to tell the media that is was good to see me frustrated.

"If you get your kicks from putting other riders' lives in danger, good for you. My reaction was genuinely not informed by any kind of frustration other than at what I perceived as dirty riding."